No. 8 GymHawks travel to No. 4 Illinois 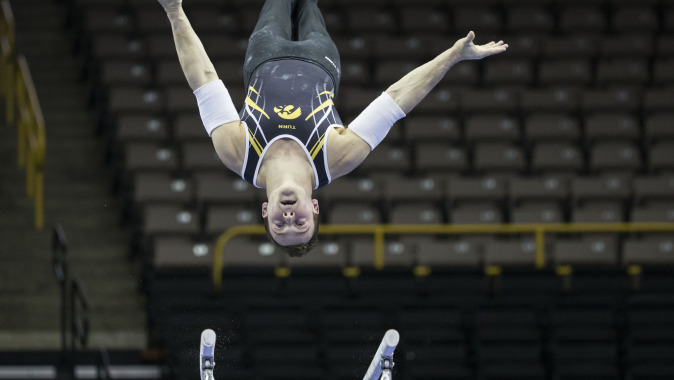 THIS WEEK:
The No. 8-ranked University of Iowa men’s gymnastics team travels to Champaign, Illinois, on Feb. 7, to face off against the No. 4-ranked Illinois Illini. The meet begins at 4 p.m. (CT).

FOLLOW ALONG:
Fans can follow the meet online through live stats. A live stream of the meet is also available. Links to both are located on the Iowa men’s gymnastics schedule page at hawkeyesports.com.

LAST TIME OUT:
The Hawkeyes hosted their first tri-meet of the season against No. 1 Oklahoma and No. 6 Ohio State on Feb. 1. Oklahoma (440.850) took the top spot with Iowa (428.450) finishing runner-up and Ohio State (422.600) finishing in third. Junior Doug Sullivan continued his stellar season on pommel horse, earning second place overall with an effort of 15.000. Junior Jack Boyle also finished runner-up on rings with a score of 15.300. Sophomore Cory Paterson set two career highs on vault (14.300) and parallel bars (14.05).

BOYLE SELECTED CO-BIG TEN GYMNAST OF THE WEEK:
Junior Jack Boyle was named Co-Big Ten Gymnast of the Week following Iowa’s win over UIC on Jan. 24. Boyle contributed two event titles — rings (15.400) and floor (14.750) — and finished second on parallel bars (14.400). It is Boyle’s first weekly conference honor of his career and the first for the Hawkeyes since Matt McGrath earned the award on March 17, 2014.

NATIONALLY RANKED:
The Hawkeyes are ranked in the top 10 nationally according to the most recent release of the College Gymnastics Association (CGA) Coaches’ Poll (Feb. 2). Oklahoma earned the top spot followed by Stanford, Penn State, Illinois and Michigan. California and Ohio State swapped spots at sixth and seventh, respectively, Iowa moved up to eighth, and Minnesota and Air Force round out the top 10.

HAWKEYES LOG FIRST WIN:
The Gymhawks notched their first win of 2015 with a 428.600-398.600 victory over the UIC Flames on Jan. 24. Jack Boyle led the Hawkeyes on rings with a meet high 15.400, clinching the event title. Doug Sullivan won pommel horse, scoring a 14.950, and Elijah Parsells placed second on the event with a career high 14.050 effort. Freshman Austin Hodges tied for third on high bar, setting a new career high with a 14.100.

HAWKEYE FACILITY RENOVATION:
The men’s and women’s gymnastics teams are amidst a practice facility renovation. Located in the UI Field House, the renovation will provide the gymnasts with more space to practice, and include two new foam pits and another pommel horse. The project will help accelerate the gymnasts’ skills and improve safety at the facility. The gym is nearing completion and the team hopes to start training in it by the end of the month.

SUMMER COMPETITIONS:
Many Iowa gymnasts stayed busy over the summer by competing in national and international competitions. Sophomore Cory Paterson kicked off the summer by being named a Canadian National Champion on high bar. Paterson scored a 13.850 and finished fifth in the all around competition with a 79.800. The Hawkeyes also had three gymnasts qualify for the P&G Championships in August. Juniors Jack Boyle and Matt Loochtan qualified for the senior division, while freshman Austin Hodges made the cut for the junior divsion. Loochtan scored a 14.900 on high bar, clinching ninth place in the event. His all around score of 54.600 was good enough for 31st. Boyle’s 14.950 on rings earned him an eighth place finish on the event and an all around score of 79.650 tied him for 26th. Head coach JD Reive belives summer competitions are a necessary part of building a championship program at Iowa.

UP NEXT:
The Hawkeyes host their final home meet of 2015 inside Carver-Hawkeye Arena against No. 9 Minnesota and No. 11 Nebraska on Feb. 14 at 7:30 p.m. (CT). The meet will be shown live on the Big Ten Network. The men’s gymnastics team will honor William Albert, Brandon Field and Lance Alberhasky for Senior Night following the competition. The meet will also serve as Elementary School Night and Club Night. The first 500 fans will recieve a free Herky bobblehead.