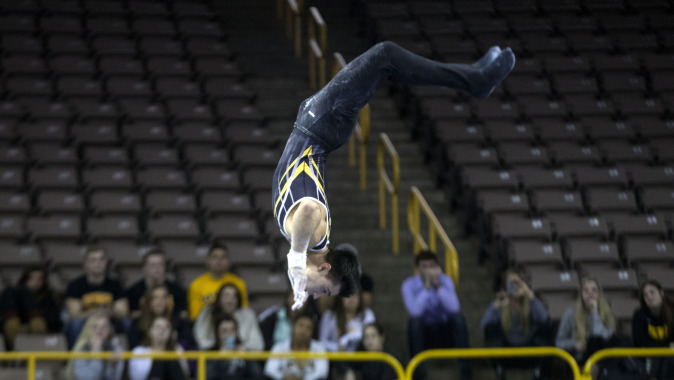 THIS WEEK:
The No. 9-ranked University of Iowa men’s gymnastics team competes in its final home meet of the season against No. 11 Nebraska and No. 10 Minnesota on Feb. 14 inside Carver-Hawkeye Arena. The competition will be televised live by the Big Ten Network with play-by-play commentator Dean Linke and analyst John Rothelisberger on the call. The meet begins at 7:30 p.m. (CT).

SENIOR NIGHT:
William Albert, Lance Alberhasky, and Brandon Field will be honored for Senior Night following the completion of this weekend’s meet. Albert has competed on rings and vault for Iowa. He tied for 13th on vault at last year’s Big Ten Championships. His personal bests are: vault (15.050) and rings (15.250). Alberhasky, an Iowa City native, has competed in the all-around for the Hawkeyes in four years at Iowa. He contributed an 11th place finish at Big Ten Championships in 2013 in the all-around (80.900) and was named team captain in his final two years. Field has excelled on floor while at Iowa. He placed 17th on floor (14.700) at NCAA Championships in 2013, and set a career-high on floor (15.000) during a meet against Nebraska in 2014.

FOLLOW ALONG:
Fans can follow the meet online through live stats at meetscoresonline.com. A live stream of the meet is also available. Links to both are located on the Iowa men’s gymnastics schedule page at hawkeyesports.com.

LAST TIME OUT:
The Hawkeyes traveled to Champaign, Illinois, to face the Illini on Feb. 7. Iowa came up short, falling to Illinois 440.150 to 424.500. Junior Doug Sullivan captured Iowa’s only event title of the meet on pommel horse with a 14.850 effort. Freshman Austin Hodges set a career-high on pommel horse, with a score of 14.450 and a fifth place finish, and freshman Dylan Ellsworth set a career-high, placing fifth on parallel bars with a 14.450.

BOYLE SELECTED CO-BIG TEN GYMNAST OF THE WEEK:
Junior Jack Boyle was named Co-Big Ten Gymnast of the Week following Iowa’s win over UIC on Jan. 24. Boyle contributed two event titles — rings (15.400) and floor (14.750) — and finished second on parallel bars (14.400). It is Boyle’s first weekly conference honor of his career and the first for the Hawkeyes since Matt McGrath earned the award on March 17, 2014.

NATIONALLY RANKED:
The Hawkeyes are ranked in the top 10 nationally according to the most recent national ranking list on roadtonationals.com (Feb. 9). The rankings are based on an average of the team’s top three scores. Penn State earned the top spot followed by Oklahoma, Illinois, Stanford and Michigan. California and Ohio State sit at sixth and seventh, respectively. Air Force is eighth, and Iowa and Minnesota round out the top 10.

SIX HAWKEYES EARN PCA HONORS:
Six gymnasts were honored by the PCA (Presidential Committee for Academic Awards) this past week. Cyrus Dobre-Mofid, Andrew Botto, Zach Wendland, Cory Paterson, and Caleb Fischle-Faulk were honored during the Iowa vs. Maryland men’s basketball game on Feb. 8. Each year the PCA honors student-athletes who have achieved a 3.0 GPA and are letterwinners. The PCA is responsible for advising the UI President and director of athletics Gary Barta on policies for the University’s intercollegiate athletics programs, and recognizes student-athletes for their accomplishments in and out of the classroom.

SULLIVAN STREAKING:
Junior Doug Sullivan continues to be a bright spot for the Hawkeyes on pommel horse. In the last three meets, the pommel specialist has averaged a 14.900 on the event, clinching event titles against UIC (14.950) and Illinois (14.850). The Aurora, Illinois., native is Iowa’s pommel horse record holder with a score of 15.250.

UP NEXT:
Select Hawkeye student-athletes will compete at the Winter Cup in Las Vegas, Nevada next week. The individual event takes place from Feb. 19 -21 inside the Riviera Hotel.