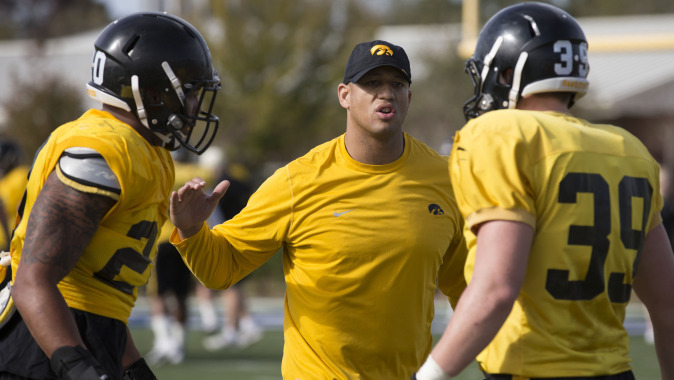 “I believe these adjustments in coaching responsibilities will add to our efficiency and productivity as a staff,” said Ferentz. “We have an outstanding group of teachers and we look forward to the challenge of building a strong 2015 Hawkeye football team.”

Wallace previously was a graduate assistant coach with the Hawkeyes (2006-08), working with the defensive secondary. He rejoined the Iowa staff from Valdosta State (2009-13), where he served as defensive coordinator from 2011-13.

Brian Ferentz has coached the Iowa offensive line the past three seasons, joining the Hawkeye staff after spending four years with the NFL’s New England Patriots. Iowa averaged just over 400 yards of total offense per game in 2014, surpassing that total for the first time since 2005 while averaging 28.2 points per game. Senior left tackle Brandon Scherff won the 2014 Outland Trophy, was the Rimington-Pace Offensive Lineman of the Year in the Big Ten, and earned unanimous consensus All-America honors.

Woods, like Brian Ferentz, was a three-year letterman for the Hawkeyes and both are former team captains. In his first two seasons as Iowa’s linebacker coach, Woods coached three linebackers who made their way to the National Football League as rookies in 2014. Christian Kirksey, Anthony Hitchens, and James Morris combined for more than 950 career tackles.

Woods, along with Hawkeye assistant Jim Reid, were named by FootballScoop as national Linebackers Coaches of the Year in 2013. Reid will continue to coach the Hawkeye linebackers.