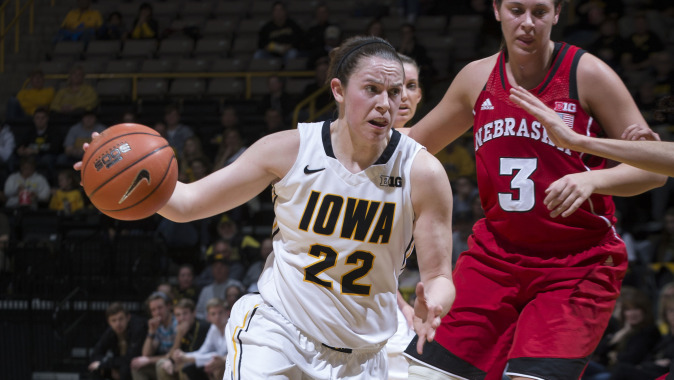 LOS ANGELES — University of Iowa senior guard Samantha Logic has been named to the Women’s Midseason Top 20 for the John R. Wooden Award. She is the lone representative of the Big Ten Conference to be announced as a frontrunner for college basketball’s most prestigious honor.

Honorees are chosen by a poll of national college women’s basketball media members. The list will be narrowed to 15 players, who will appear on the National Ballot. The Wooden Award All American Team, consisting of the nation’s top five players, will be announced the week of the Final Four.

The John R. Wooden Award, created in 1976, is awarded to the nation’s best player at an institution of higher education who has proven to his or her university that he or she is making progress toward graduation and maintaining a minimum cumulative 2.0 GPA.

Logic was most recently named to the Naismith Trophy Women’s Midseason 30 list on Feb. 11, and has also been named to the 2015 Nancy Lieberman Award Watch list, is a 2014-15 `Wade Watch’ candidate, and appears on the Dawn Staley Award Watch List. The preseason All-Big Ten honoree and ESPN All-American is also a Capital One Academic All-District selection.

The Racine, Wisconsin, native is the NCAA’s active career assist leader (801) and is fourth in assists in Big Ten history. Logic is just the 28th player in NCAA history to distribute more than 800 assists in her career. She leads the Big Ten and ranks fifth in the NCAA in the category this season (7.5), while averaging 11.8 points per game and 6.8 rebounds per game.