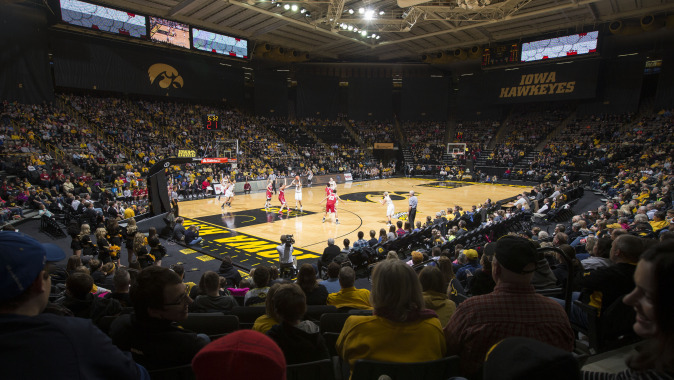 Lisa Bluder: It was another good victory for us. I felt like we really had this in control the entire game. I felt like we were in control. I felt like we got good bench play today, and that’s really important knowing that we only have one day to prepare for Minnesota and no rest days. Usually in a three game swing you’re getting one day to rest in between those, and we don’t have that this time.

It was really important that we went to the bench, and our bench performed. Our bench came and played today, and so that was great.

Sam has a double double and 33 minutes. Chase has a season high, career high of nine points, four for five shooting, that was great. Four people in double figures, one point away from having five in double figures. I love that. We took care of the ball with only 10 turnovers, 26 assists. I thought it was just a really nice, well played game for us. It was nothing real flashy but a good old fashioned win, which was nice. I think the extra factor here was that we had almost 8,800 people that came here and helped us, and we appreciate that so much.

Q. Was that as good as you’ve seen Chase (Coley) play?
Lisa Bluder: Yeah, I thought she played really well. And she played a lot of minutes, too, and so I thought she did a good job on both ends of the floor. She has three rebounds and obviously shot the ball with confidence, so that was nice to see.

Q. This was one of the team’s better rebounding performances on the year. How important was that?
Lisa Bluder: Really important because we want to start swinging that number because we have not performed as well as we can on the rebounding end. Boy, the way we crashed today, and I thought we got a bunch in the first half and it kind of gave us, hey, we can actually do this kind of thing, so I think that was good momentum for us to continue crashing.

Q. You mentioned this stretch, these three games. How do you feel now after two of them are over?
Lisa Bluder: You know, we’re 2 0, and I want to be 3 0. That’s all our focus is right now is going to that Minnesota game. They’re in the same boat. They are playing at Penn State today, so they have just one day to prepare for us, as well. Obviously they have the advantage of these three games having two of them at home and only one on the road, where we’re the only way around, plus they played on Wednesday night instead of Thursday night, so they have one rest day on that end of it.

Minnesota is a great team, and honestly I don’t know a lot about them because I haven’t looked that far ahead yet, but I feel like our seniors are providing such great leadership for us, and I think we played pretty mistake free basketball today, which is what you want to be doing at this time of year is not making a whole lot of kind of silly mistakes, and I feel like we did that today.

Q. Was today as complete of a game as you guys have had in a while?
Lisa Bluder: I really think it was. We took care of the ball, we rebounded, we passed the ball really well. We got a little three point happy in the first half, but besides that, I think it was a really solid, complete game. I agree with you.

Q. A couple days ago the tournament committee released that top 20 of the teams that would be on those top five seeds, something they’ve never done before. Do you like knowing that you’re in that top five seeds with a few weeks to go?
Lisa Bluder: It’s great. I think they did it for the hoopla, to get everybody kind of excited that hey, these are teams that could potentially host, and we are certainly happy to be among that group, but nothing is binding in there, so we know that, and we’re going to keep the focus. We’re not going to let that get to our heads. We’re going to enjoy that, but we also know we’re going to keep going game by game, finish this season out. We’re 14 0 at home right now, and the Iowa record, the Carver Hawkeye record is 15-0 (in a single season), and we want to get that record.

Q. What’s tomorrow going to be like between installing Minnesota and coming off of a game and traveling and everything that you have in front of you?
Lisa Bluder: Yeah, we don’t have a whole lot of these situations that we’ve done this before, like been there, done that. That’s not the way it’s been with this type of scenario. We have to balance between film and them watching Minnesota and then less time on the floor and spend time I think on our defense than our offense, because I feel like our offense, we’re good there. I feel like we don’t need to spend a lot of time there. That’s probably a bad thing to say, isn’t it? Preparing more for them and less for us since we just have the one day, and then we practice at 12:00 tomorrow to 3:00, and 4:00 get on a bus, and out of here.