GymHawks Travel to No. 17 Denver for Tri-Meet 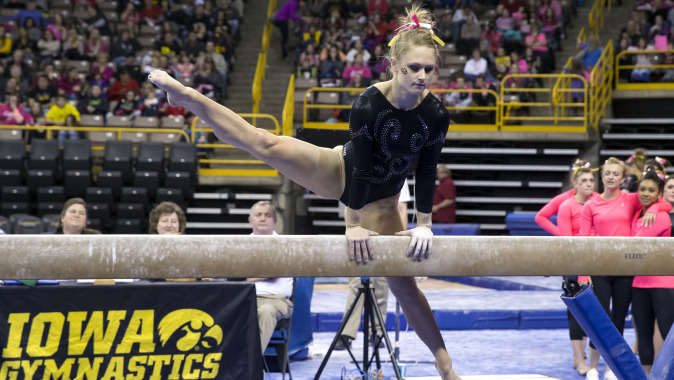 THIS WEEK:
The University of Iowa women’s gymnastics team is set to travel to Denver, Colorado, to take on the No. 17 Denver Pioneers and BYU Cougars in a tri-meet on Saturday. The meet is slated to begin at 7 p.m. (CT) inside Hamilton Gymnasium.

LAST TIME OUT:
The GymHawks fell to Illinois on Feb. 14, 196.975 to 196.375, inside Carver-Hawkeye Arena. The score marked a season best for the Hawkeyes, replacing their previous score of 195.725 against Maryland on Jan. 30 inside Carver-Hawkeye Arena. Eight GymHawks earned a total of 10 career bests to highlight the competition. Leading the pack was senior Sydney Hoerr with a pair of bests on vault (9.800) and bars (9.875). Registering her own pair of career bests was sophomore An- gel Metcalf, posting scores of 9.900 and 9.825 on vault and floor, respectively. Rounding out the season best list were sophomores Ashleigh Edlin, Caroline McCrady, Mollie Drenth, and freshmen Ashley Fischer, Melissa Zurawski, and Nikki Youd.

HEAD COACH Larissa Libby:
Larissa Libby is in her 11th year as head coach, and 15th year overall, at the University of Iowa in 2014-15. In 2014, six Hawkeyes were selected for NCAA Regional competition. Alie Glover, Angel Metcalf, and Sydney Hoerr were selected as all-around competitors, while Jordyn Doherty competed on vault and Mollie Drenth competed on floor. Maryah Huntley was selected as the alternate behind Drenth on floor. Libby coached Hoerr to second team All-Big Ten honors, while Hoerr, Caitlin Tanzer and Glover earned Academic All-Big Ten honors. Libby led Iowa to its sixth- consecutive NCAA postseason appearance and the seventh in her tenure in 2013.

PRACTICE FACILITY RENOVATION:
The women’s gymnastics team is amidst a practice facility renovation. The gym — located in the UI Field House — is scheduled to be completed in April 2015. The renova- tion will include new equipment, more space to train, and enhanced safety and resources for Hawkeye student-athletes.

METCALF, HOERR NAMED TO BIG TEN WATCH LIST:
Angel Metcalf and Sydney Hoerr have been named to the 2015 Big Ten Gymnasts to Watch List. Metcalf, one of six sophomores to make the list, hails from Swansboro, North Carolina. She captured her third all-around title last season season against No. 20 Ohio State on Feb. 14 in Iowa’s annual Pink Meet. Metcalf improved her all- around score to 39.325. She previously posted a season best at Georgia (39.100). Metcalf received a bid to NCAA Regionals with five of her teammates to compete in the all-around. She competed in 12 meets last season, nine of which she competed for the all-around title. Her season-best all-around score of 39.325 has been tallied twice; the most recent at the 2014 Big Ten Championships.

UP NEXT:
Iowa will travel to Davis, California, to take on UC Davis on Friday, February 27. The meet is scheduled to begin at 7 p.m. (CT) inside the Pavilion.