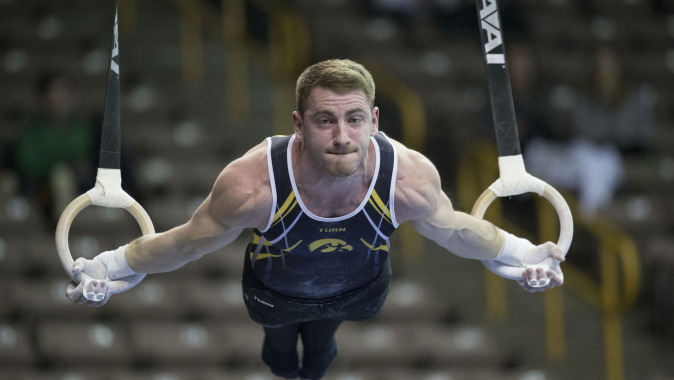 THIS WEEK:
The University of Iowa men’s gymnastics team will send two gymnasts to Las Vegas, Nevada, this weekend to compete in the annual Winter Cup Challange located inside the Riviera Hotel. Juniors Jack Boyle and Matt Loochtan will represent the Black and Gold. Day one of the competition begins at 3 p.m. (CT).

FOLLOW ALONG:
Fans can follow the meet online through a live stream at wintercupchallenge.com/live. A link to the live stream is available on the team’s schedule page at hawkeyesports.com.

NATIONALLY RANKED:
The Hawkeyes are ranked in the top 10 nationally according to the most recent national ranking list on roadtonationals.com (Feb. 16). The rankings are based on an average of the team’s top three scores. Oklahoma reclaimed the top spot over Penn State followed by Illinois, Stanford and Michigan. Iowa moved up to sixth following wins over Nebraska and Minnesota. California and Minnesota are seventh and eighth, respectively. Ohio State drops to ninth and Air Force rounds out the top 10.
1. Oklahoma
2. Penn State
3. Illinois
4. Stanford
5. Michigan
6. Iowa
7. California
8. Minnesota
9. Ohio State
10. Air Force

QUOTING COACH REIVE:
“We use these two weeks that we are off to train super hard,” Reive said. “You’re getting a bit of focus training and a little bit of recovery, so when we hit the following weekend we can cruise right through the rest of the season and into the postseason. We can always do more. This is a pursuit of perfection. I want to be better and the guys want to be better. We are not trying to show up, we are trying to place top three in the country.”

SIX HAWKEYES EARN PCA HONORS:
Six gymnasts were recently honored by the PCA (Presidential Committee for Academic Awards) this past week. Cyrus Dobre-Mofid, Andrew Botto, Zach Wendland, Cory Paterson, and Caleb Fischle-Faulk were honored at halftime of the Iowa vs. Maryland men’s basketball game on Feb. 8. Each year the PCA honors student-athletes who have achieved a 3.0 GPA and are letter winners. The PCA is responsible for advising the UI President and director of athletics Gary Barta on policies for the University’s intercollegiate athletics programs, and recognizes student-athletes for their accomplishments in and out of the classroom.

UP NEXT:
The Hawkeyes travel to University Park, Pennsylvania, for a dual meet against No. 2 ranked Penn State on Feb. 27. The event begins at 6 p.m. (CT).