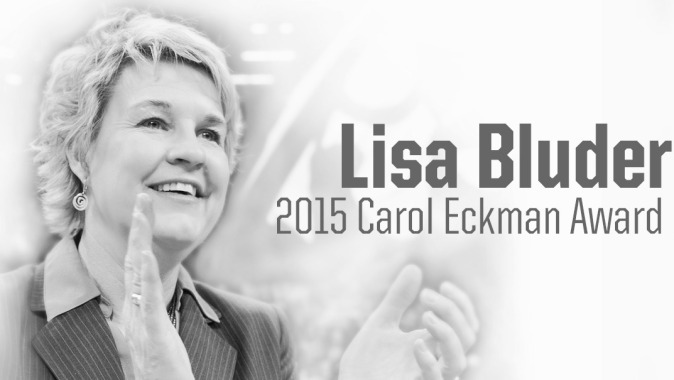 The Carol Eckman Award is presented annually to an active WBCA member coach who exemplifies Eckman’s spirit, integrity and character through sportsmanship, commitment to the student-athlete, honesty, ethical behavior, courage and dedication to purpose. The award is named in honor of the late Carol Eckman, the former West Chester State College coach, who is considered the “Mother of the Women’s Collegiate Basketball Championship.” Eckman organized the first women’s basketball championship at West Chester in 1969, and continued to garner recognition and support for the women’s game until her death from cancer in 1985.

“I am delighted to present Lisa Bluder with the Carol Eckman Award,” said WBCA Executive Director Danielle Donehew. “Lisa is a talented coach and teacher whose unmatched commitment to her student-athletes has enriched their collegiate experience as well as prepared them for future success in life. Through her example over her 31 years as head coach, she embodies the spirit of the late Carol Eckman and has left her own unique mark in furthering the game of women’s basketball.”

Bluder is currently in her 15th season as the head women’s basketball coach for the University of Iowa, and is the all-time winningest coach in school history. Since taking over at Iowa, Bluder has been named the Big Ten’s Coach of the Year three times, and has helped guide the Hawkeyes as the only team in the conference to earn a bid to the NCAA tournament in each of the past seven seasons.

Bluder’s impact at Iowa was felt right away as she guided the Hawkeyes to a Big Ten tournament title and was named the WBCA Regional Coach of the Year. Her impact and success has not been limited to just the court, however, as she has also played an integral part in the success of her student-athletes off of the court. Under Bluder, Iowa’s student-athletes have been named Academic All-Big Ten honorees 62 times, including a program-best eight in 2011 and 2012, and have earned Academic All-American distinctions twice.

Upon graduating from the University of Northern Iowa in 1983, the Marion, Iowa native began her coaching career immediately as the head coach at St. Abrose University, where she compiled a 169-36 record and made two Final Four national semifinal appearances in six seasons at the NAIA school. After her six successful seasons, Bluder made the move to NCAA Division I where she took over the Drake University program for 10 seasons before moving on to Iowa.

Iowa currently sits in second place in the Big 10 Conference standings with a 12-3 record, and a 21-5 mark overall.

Bluder will be formally recognized during the fifth annual WBCA Awards Show, which will be held at 5:30 p.m. ET Monday, April 6, in the grand ballroom at the Tampa Marriott Waterside. This event is part of the WBCA National Convention and is held in conjunction with the NCAA® Women’s Final Four® in Tampa Bay.

About the WBCA
Founded in 1981, the Women’s Basketball Coaches Association promotes women’s basketball by unifying coaches at all levels to develop a reputable identity for the sport and to foster and promote the development of the game as a sport for women and girls. For more information on the WBCA, please visit WBCA.org.