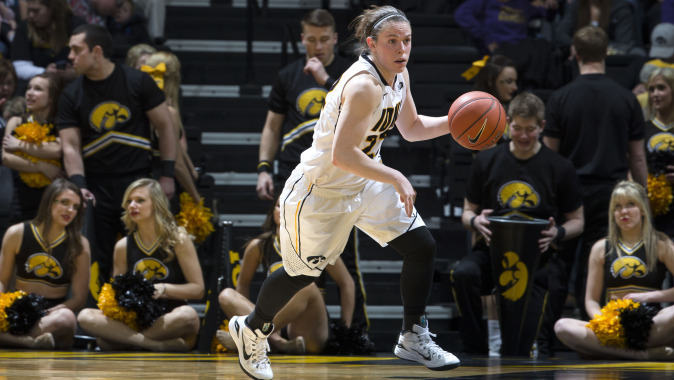 Logic, named preseason All-Big Ten and preseason All-America by ESPN, has been named a 2014-15 `Wade Watch’ candidate, and to the Naismith Trophy Women’s Midseason 30 List, the John R. Wooden Award Women’s Late Season Top 20 List, and the Dawn Staley Award Watch List. She has also been named a finalist for the 2015 Senior CLASS Award® and has been named a Capital One Academic All-District honoree.

Logic, the NCAA’s active career assists leader (831), ranks third in assists in Big Ten history. She leads the Big Ten and ranks third in the NCAA in the category this season (7.7), while also averaging 12.8 points and 6.8 rebounds per game. Logic is one-of-two players nationally to average at least 11 points, seven assists, and six rebounds per game (Brittany Boyd of California).

“These 15 candidates exhibit floor leadership, play-making, and ball-handling skills similar to those of Hall of Famer Nancy Lieberman. We are pleased to be recognizing them for their commitment to the game,” said John L. Doleva, President and CEO of the Basketball Hall of Fame.

A premier Selection Committee made up of top college basketball personnel including Hall of Famers, media members, head coaches, and sports information directors was appointed by the Hall of Fame to review the candidates. The list will be narrowed down to a final five by mid-March with the Lieberman Award winner announced during the WBCA Award Show in Tampa, Florida at the Women’s Final Four.