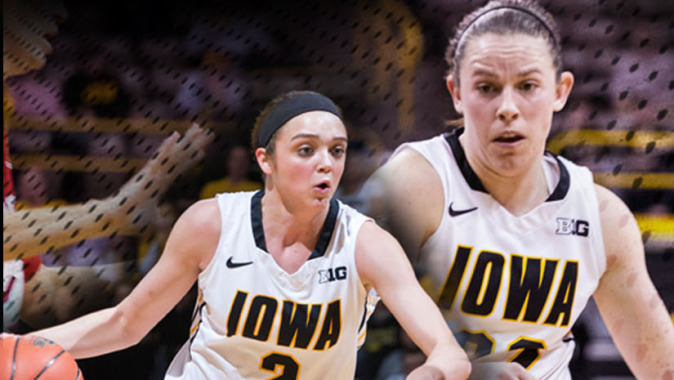 Disterhoft, a business major, and Logic, a health and human physiology and sports studies major, account for two of the 15 honorees, and represent two of the three honorees from the Big Ten. Iowa is the only Division I school in the nation to have two honorees, while Disterhoft is the only sophomore to earn the accolade.

Logic, named preseason All-Big Ten and preseason All-America by ESPN, has been named a 2014-15 `Wade Watch’ candidate, a Nancy Lieberman Award finalist, and to the Naismith Trophy Women’s Midseason 30 List, the John R. Wooden Award Women’s Late Season Top 20 List, and the Dawn Staley Award Watch List. She has also been named a finalist for the 2015 Senior CLASS Award®.

Logic, the NCAA’s active career assists leader (831), ranks third in assists in Big Ten history. She leads the Big Ten and ranks third in the NCAA in the category this season (7.7), while also averaging 12.8 points and 6.8 rebounds per game. Logic is one-of-two players nationally to average at least 11 points, seven assists, and six rebounds per game (Brittany Boyd of California).

Logic (5-foot-9) — the 2014 Big Ten leader in assists — was the only player in the nation to average 13 or more points (13.3), six or more rebounds (6.6), and seven or more assists (7.5) last season. She led the Big Ten in league play in assists (8.0) and steals (3.0). Logic was named Big Ten Player of the Week three times, while also being named to the Big Ten Player of the Week Honor Roll four additional times. She was named 1-of-22 watch list finalists for the 2014 Nancy Lieberman Award (nation’s top point guard).

The University of Iowa is the only Division I institution this season with at least one male and one female basketball recipient of this national academic distinction, as Mike Gesell of the men’s basketball team also earned third team laurels.