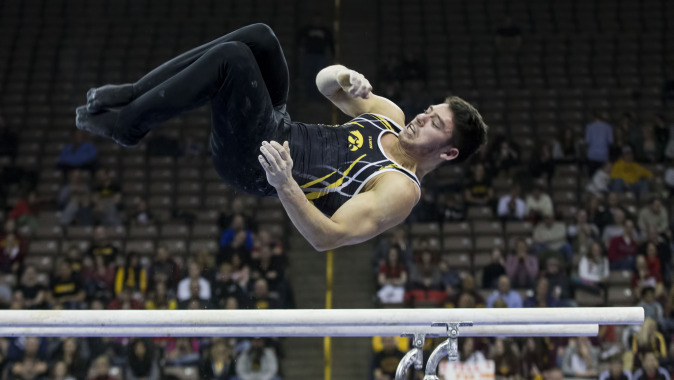 IOWA CITY, Iowa — The No. 6-ranked University of Iowa men’s gymnastics team traveled to University Park, Pennsylvania, for a Friday night meet at No. 2 Penn State. Despite a setting a season-high team score, the Hawkeyes fell to Penn State 435.750 to 440.800.

“It was a fun, competitive meet,” head coach JD Reive said. “We did our job tonight. The big thing was that it was our first five up- five count meet. It just shows that every team makes mistakes and we can keep up with anybody. We had our shots tonight and didn’t capitalize, but overall it was a great meet for us.”

Doug Sullivan led the Hawkeyes on pommel horse, clinching a third place finish with a score of 14.850. Elijah Parsells followed in fourth place, tying a career high with a 14.750. Austin Hodges finished with a 14.400 effort.

The Hawkeyes moved to vault on the third rotation. Loochtan claimed the event title following a score of 14.950. Andrew Botto finished third place and set a new season-high on the event with a 14.750. Will Albert tied for fifth place, posting a score of 14.500.

Botto and Albert led the Hawkeyes on rings, both scoring a 15 on the event and tying for third place. Alberhasky (14.950) set a new season-high, earning a sixth place finish. After four rotations, the Hawkeyes kept it close, trailing by 3.75 going into the fifth rotation.

Iowa concluded the meet on parallel bars but couldn’t keep up with the Nittany Lions. Cyrus Dobre-Mofid finished first place following a career-high 15.250. Boyle posted a 14.700, finishing sixth place, and Loochtan finished eighth with a 14.550 effort.

The Hawkeyes continue their road stretch with a meet in Minneapolis on March 7. The competition begins at 7 p.m. (CT).