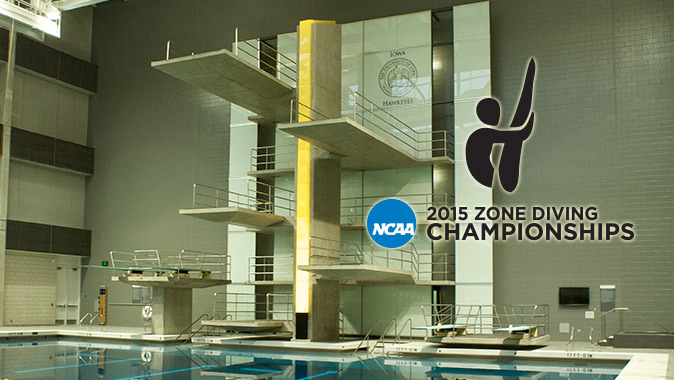 The Setting
The University of Iowa diving team will host the 2015 NCAA Zone D Diving Championships from March 9-11, at the Campus Recreation and Wellness Center Natatorium in Iowa City, Iowa.

Live Results
Fans can follow this week’s action at http://www.divemeets.com/

** Events will run “straight through” with a 15 minute break between the end of preliminaries and the beginning of the finals. Divers in the finals are allowed to practice during the 15 minute break. **

Diving to the NCAAs
The top five female and top four male divers from each event at their respective zone diving meet will be eligible to compete at the NCAA championships. Additional place finishers in each event at each zone will be eligible based on the number of student-athletes from that zone who finished in the top 16 in that event at the previous year’s NCAA championships.

Any diver that is eligible to compete as noted above will be allowed to optionally enter any other event(s) at the championships, provided that the diver finished in the top 12 at the same zone meet and has achieved the zone qualifying score for that event prior to the NCAA championships.

B1G Championships
Abby Grilli, Lydia Lehnert, and Addison Boschult posted top-10 finishes at the men’s and women’s 2015 Big Ten Championships. Grill finished seventh on the 1-meter, diving to a score of 306.70, while Lehnert (312.20) and Boschult (387.20) posted sixth-place finishes on the platform.

Boschult in 2014
Boschult posted a top-5 finish a season ago at the 2014 Zone Diving Championships in Minneapolis after diving to a (then) school record during the prelims on the platform (381.50). He finished fifth overall.