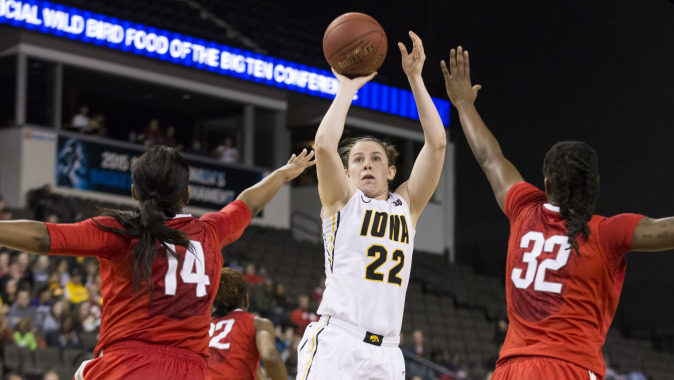 Logic, a unanimous first team All-Big Ten selection for the second-straight year, became the first Hawkeye since Kachine Alexander (2010, 2011) to earn multiple first-team All-Big Ten honors, and the ninth in program history. The team co-captain has been honored by the Big Ten in all four years, earning third team honors as a sophomore, while being named to the All-Freshman Team in 2012.

Logic, named preseason All-Big Ten and preseason All-America by ESPN, has been named a 2014-15 `Wade Watch’ candidate, a Nancy Lieberman Award finalist, to the Naismith Trophy Women’s Midseason 30 List, and the Dawn Staley Award Watch List. She has also been named a finalist for the 2015 Senior CLASS Award® and a Capital One Academic All-American. On March 2, she was named Big Ten Player of the Week and ESPN’s National Player of the Week.

Selected by the Wooden Award National Advisory Board, the ballot consists of 15 student-athletes who are eligible for college basketball’s most prestigious honor. All balloted players have proven to their universities that they are making progress toward graduation and are maintaining at least a cumulative 2.0 GPA.

Voting begins March 16, and voters, consisting of hundreds of members of the national women’s college basketball media, may take into consideration the opening rounds of the NCAA Tournament. Voting ends March 24. The Wooden Award All-American Team, consisting of the nation’s top five players, will be announced the week of the Final Four. The 39th annual Wooden Award ceremony will honor and reveal the Men’s and Women’s Wooden Award winners, and will include the presentation of the Wooden Award All American Teams and the Legends of Coaching Award, which in 2015 will go to San Diego State Head Men’s Basketball Coach Steve Fisher. This announcement of the winners will be televised live on ESPN2 from Club Nokia in Los Angeles at 5 p.m. on Friday, April 10, as part of the first ever College Basketball Awards Show Presented by Wendy’s.