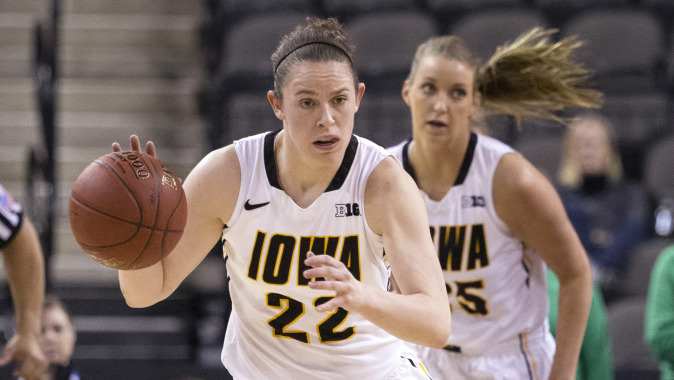 SPRINGFIELD, Mass. — University of Iowa senior Samantha Logic is 1-of-5 finalists for the 2015 Nancy Lieberman Award, the Naismith Memorial Basketball Hall of Fame announced today. The honor is awarded to the top point guard in women’s Division I basketball.

Logic is joined on the list by Niya Johnson of Baylor, Lindsay Allen of Notre Dame, Moriah Jefferson of UConn, and Kelsey Mitchell of Ohio State.

Finalists were selected by a committee of college basketball personnel including Hall of Famers, media members, head coaches and sports information directors. The award winner will be announced during the Women’s Basketball Coaches Association Award Show at the Women’s Final Four in Tampa, Florida.

Logic — named preseason All-Big Ten and preseason All-America by ESPN — is also 1-of-15 players named to the ballot for the John R. Wooden Award. In addition, she has been named a 2014-15 `Wade Watch’ candidate, to the Naismith Trophy Women’s Midseason 30 List, and the Dawn Staley Award Watch List. The Racine, Wisconsin, native is a finalist for the 2015 Senior CLASS® Award and a Capital One Academic All-American. On March 2, she was named Big Ten Player of the Week and ESPN’s National Player of the Week.

Logic, a unanimous first team All-Big Ten pick for the second consecutive season, became the first Hawkeye since Kachine Alexander (2010, 2011) to earn a first team All-Big Ten honor more than once, and the ninth in program history. She has been recognized by the conference in all four seasons, earning third team honors as a sophomore and all-freshman team distinction.