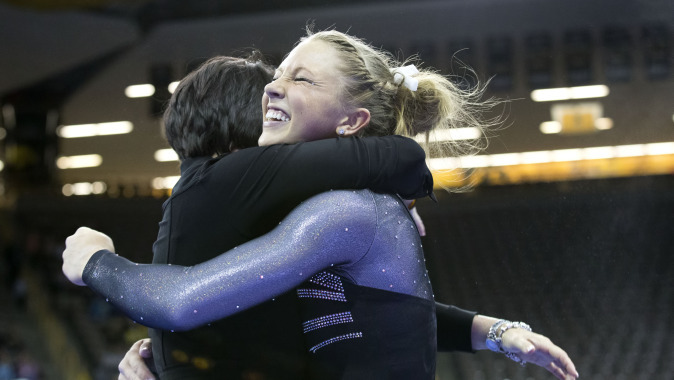 IOWA CITY, Iowa — Sophomore Mollie Drenth earned the first Big Ten Event Specialist of the Week accolade of her career after capturing an event title on bars (9.925) in the Big Five meet competition last weekend. She recorded a win on beam for the Hawkeyes with a career best score of 9.900. In addition, Drenth finished eighth on floor with a 9.800 effort.

We are very excited for the recognition Mollie has been honored with. Her performances this weekend helped Iowa to secure one of the highest scores this season and move us up in the ranking to finish the regular season at number 24,” said head coach Larissa Libby. “Mollie has been consistent for us all season but we are pleased that her efforts have been recognized by our conference.”

Drenth is the first to earn a weekly conference honor since Feb. 11, 2013, when Alie Glover was named Freshman of the Week.

Drenth and the GymHawks begin postseason action on Saturday, March 21 at the Big Ten Championships. Iowa will compete in the morning session, beginning at 10:30 a.m. (CT). The Big Ten Network will provide live coverage of session one (10:30 a.m.) followed by session two (3:30 p.m.).