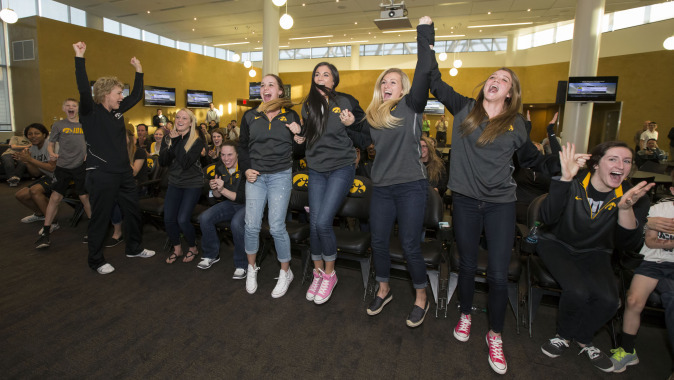 IOWA CITY, Iowa — The University of Iowa women’s basketball team has received an at-large berth into the NCAA Women’s Basketball Championships for the eighth straight season. The 15th-ranked Hawkeyes (24-7, 14-4) are a No. 3 seed and will play No. 14 seed American (24-8, 16-2) from the Patriot League at approximately 1:30 p.m. (CT) on Friday inside Carver-Hawkeye Arena. The game will be televised live on ESPN2. This will be the first ever meeting between the two schools.

This year marks Iowa’s 24th trip to the NCAA Tournament. Head coach Lisa Bluder has led the Hawkeyes to 12 NCAA Tournament appearances in her 15 years at Iowa, including each of the last eight years. Iowa is the only Big Ten team, and one of only 10 teams in the country, to appear in the last eight NCAA Tournaments (Baylor, DePaul, Tennessee, Stanford, Oklahoma, Duke, Texas A&M, Iowa State, and Connecticut).

The Iowa City First/Second Round site is a part of the Oklahoma City region. No. 6 Washington will take on No. 11 Miami (FL) in the first game on Friday inside Carver-Hawkeye Arena at 11 a.m. (CT). Sunday’s Second Round game time is TBA.

American, 24-8 overall and 16-2 in league play, is making its first NCAA Tournament appearance after winning the Patriot League tournament and regular season championships.