The Final Push to the Postseason 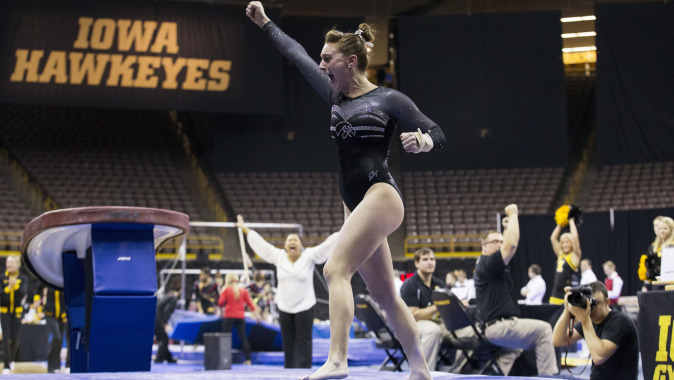 IOWA CITY, Iowa — In preparation for postseason action, the University of Iowa women’s gymnastics team has taken time to reflect on the extensive progress they have made in just under a year.

“Being in the top 36 at the end of conference championships qualifies you for the first round of the tournament,” said UI head coach Larissa Libby. “At the beginning of the year, we had no idea how far we were going to get. For this team to go from not qualifying last year to being able to qualify and get into the top 25 is a big deal.”

These kinds of accomplishments do not come without hard work. The GymHawks have spent the past year strengthening themselves physically and mentally.

“What they have been focusing on in mental training is the fact that everyone can compete, but who can dominate their competition? There is a difference and that starts with mentality,” said Libby. “If they can walk into these next two competitions with the mentality that they belong with the very best, you will see some amazing gymnastics from them.”

The main goal set out by the team at the season’s start was to compete in the postseason as a team.

“Getting to the first round is exciting for this team,” said Libby. “We had a few girls go as individuals last year and it was tough because you just don’t want to go without your team. What makes them special is they have never put themselves before the team.

“They want to go with the team, or they aren’t going. That has been the mentality all year long and I think it has made a huge difference.”

The GymHawks’ success has not been an easy feat in the Big Ten Conference, where nine of the 10 teams rank in the top 30 nationally.

“The team is excited to see where we compare,” said Libby. “Having nearly all of the teams in the top 35 speaks to the strength of the conference and how tough it is to be the best in our conference.”

With their mental goals in mind, the GymHawks accomplished their qualifying goal over the weekend by posting a season high score of 196.425 at the Big Five meet. The performance earned the team a top 25 ranking for the fourth consecutive week. The GymHawks are ranked 23rd nationally, the highest ranking this season and the program’s first top 25 ranking since 2012.

“They have yet to have their best meet,” said Libby. “I am excited to see where this team could go when they hit all four of their events. We are going back to work on floor and make sure we are giving ourselves a shot. It will be tough, but so far this team has hit every challenge they have faced so why would they not be able to hit another?”

The GymHawks will travel to Ann Arbor, Michigan, for the Big Ten Championships on March 21. Iowa will compete in the morning session, beginning at 10:30 a.m. (CT). BTN will provide live coverage of both sessions.