4 Hawkeyes to Compete at NCAA Championships 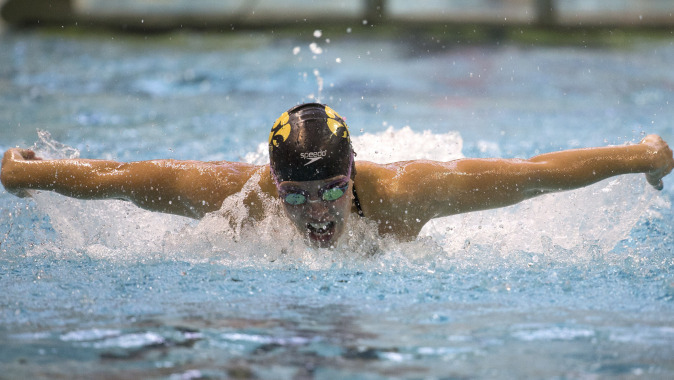 This Week
The University of Iowa women’s swimming and diving team will be represented by four student athletes at the 2015 NCAA Championships in Greensboro, North Carolina, from March 19-21. Redshirt senior Joelle Christy, senior Becky Stoughton, and sophomore Calli Head and Emma Sougstad will participate at the championships.

Live Stats
For live results from your computer or smart phone, visit: http://www.swmeets.com/Realtime/AAC/2015/ Fans can also follow live action on the “Meet Mobile” swim meet application on cell phones and tablets. Download the application at this link: http://www.active.com/mobile/meet-mobile-app.

Greensboro Aquatic Center
The Greensboro Aquatic Center (GAC) is a state-of-the-art facility featuring leading edge concepts in aquatic design. The GAC is located on the campus of the Greensboro Coliseum Complex, the premier sports and entertainment facility in the Southeast. The GAC brings together all major aquatic sports – competitive swimming and diving, water polo, synchronized swimming and other unique sports all in one venue. The GAC fully meets NCAA and FINA standards and offers Greensboro the opportunity to host high school and collegiate events, USA Swimming meets, Master’s swimming and U.S. Water Polo events as well as a myriad of local, regional, national and international competitions.

4 Hawkeyes in the NCAA Championships
Four swimmers and divers will compete at this year’s championships. The last time the Iowa women’s team sent four or more student-athletes was in the 1992-93 season, when the Hawkeyes were represented by eight student-athletes.

Get to Know Hawkeyes
Redshirt Senior Joelle Christy: Christy, a native of Springfield, Illinois, leads the Hawkeyes on the one-meter (316.50) and is second in the three-meter (317.48). Her score of 319.45 on the one-meter ranks fifth all-time and her point total in the three meter (327.08) ranks seventh in school history. Christy will compete off the 1-meter after qualifying at the 2015 NCAA Zone D Diving Championships with an eighth-place finish, scoring 599.00 points on 12 dives.

Sophomore Calli Head: Head, a native of Fox Point, Wisconsin, set the UI school record on the platform at the 2014 Big Ten Championships. She will compete at the NCAA Championships off of the platform, having qualified at the 2015 NCAA Zone D Diving Championships with an 11-dive score of 559.30 — finishing seventh overall.

Quick-Cap 2015 B1G Championships
Iowa capped the 2015 Big Ten Championships with 10 new UI swimming records in addition to one on the diving end. The Hawkeyes crowned on Big Ten Champion (Stoughton, 1,650 free) and finished eighth in the Big Ten with 223 points. Minnesota (618.5) and Indiana (591) were the top finishers.

Iowa Swimming and Diving Tradition
Iowa was one of the first schools in the nation to compete on a collegiate level and competed at the first NCAA Championship. From 1937 to 1960, Iowa placed in the NCAA top 10 18 times, crowning nine NCAA and 23 Big Ten champions.