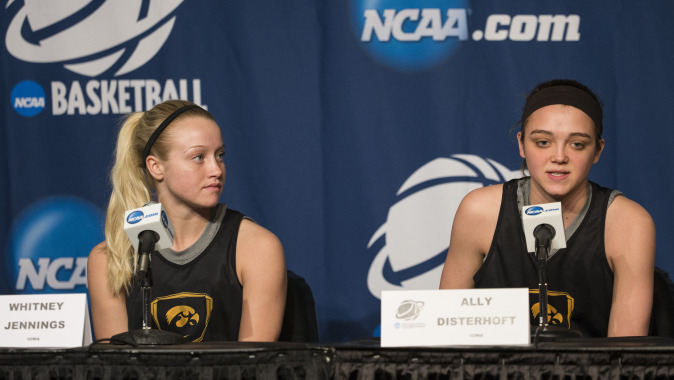 Lisa Bluder: Good to be here today. Obviously love playing in the second round.

You know, right now, I think coming into this year Patrick, our unbelievable SID gives me all these great facts. He told me, I think there’s only 20 other schools in America that have made it to the last two straight NCAA second rounds, and now we’re in our third year of doing that. So I’m sure that number is going to go down. And it’s great to be here but I don’t think it’s any secret that we want to go farther; that we would love to be playing next week.

We know that Miami is a great team and they have the same goals as we do. I feel like home court advantage is tremendous. I think we are going to have a great crowd here tomorrow at 11 o’clock and I think they are going to help us.

Our seniors have been great leaders all year for us and they are going to do it again tomorrow. And I’m excited about the game. I think it’s going to be a great game. And we’ll hopefully be pretty excited tomorrow at this time.

Q. Is it fair to say that this is the best opportunity for advancement that you’ve had in your four years?

Samantha Logic: I think on paper it is. You know, being the higher seed on our home floor the last two years here, we’ve been eight and then a six, playing a really good three seed last year in Louisville, probably deserved to be a little higher than that.

On paper, yes, but as you’ve seen in the men’s tournament, and now in the women’s a little bit more, numbers really don’t matter. It’s just how you go out and play. So we are not looking at numbers and how good of a chance we have. We know we are going to have to execute and play a really great game tomorrow.

Ally Disterhoft: Yeah, just what Sam said, it’s the NCAA Tournament now and anything can happen. You have to be ready to go on any given night. I totally agree. Seeding doesn’t matter at this point. You have to come out from the get go with that intense mind set and that’s what we plan to do tomorrow.

Whitney Jennings: This is my first year in the tournament but on paper we are the team that’s supposed to win. We feel good that we’re back in Carver and 17 0 and just looking to build on that tomorrow afternoon.

Ally Disterhoft: Our fans have been amazing all throughout the year. We talk about it all the time. There’s nothing better than running out of the tunnel to 10,000 screaming fans, whether it’s hitting a big shot or passing it to Beth, Sam, Melissa, whoever, for a wide open shot and hearing that the fans are up, that’s a great feeling.

So we really hope that our fans again come out and support us tomorrow. They make a huge difference in the game. They are influencers and they have done great things for us this year, we really do appreciate it.

Q. You’ve been at this for a long time, 15 years at high with a, in your mind; this your best opportunity to break through and get to the Sweet 16?

Lisa Bluder: You know, I think it is. Again, I think the women explained it really well up here. You know, on paper, definitely; but you come into a game, and depth Miami is a talented team. They are athletic, they are quick, they are good outside shooters. They are well coached. We know it’s going to be a battle and this time of year, it’s a lot of times, it’s who gets hot: Who gets hot at the end of the year; who’s playing with that confidence; who has got the emotion on their side.

And so all those things come into play, and I think less important are the seedings, especially when you get into the second round, and more important is who is believing in them and their team at this point.

Q. Does it get to a point where with a team like this, where you can almost I don’t want to say being hands off in practice, but you know that they know what the mission is. You have enough leadership on this team where you can make smaller tweaks as the season goes on. Has it been like that for you this year with this crew?

Lisa Bluder: Well, this team, the leadership is amazing with this group. And it comes in so many ways, not only in them directing each other on what to do but also just in what they are saying in the locker room and how they lead by example. And so all those different ways, it’s been a great group for leaders.

But I wouldn’t say it’s been hands off, but certainly they have needed less guidance than other groups.

Q. For what you need to do for tomorrow

Lisa Bluder: They are really good outside shooters. I mean, they are smooth. I mean, Motley, she is a really good offensive player. I mean, she had 30 points last night against Washington. Her jump shot is smooth and she is very, very good with that.

They are an excellent defensive team. They scored well over their offensive averages last night but defensively, they are holding people well below their averages, and so that’s I think probably the thing that bothers us or worries us the most as coaches is just making sure that our offense can run smoothly and we can take care of the ball.

Q. Maybe keep them away from the three point line and funnel them a little bit further inside on offense?

Lisa Bluder: Well, they get to the free throw line a lot, obviously because they put the ball on the floor so well. You know, we definitely don’t want to get into foul trouble against them and draw fouls trying to defend their drives.

Lisa Bluder: I think there were only two seniors on the team that are the same from that squad.

Q. Even though they are an 11th seed, they did beat Notre Dame. Is that something that you can use to kind of get everybody’s attention?

Lisa Bluder: Yeah, and our team knows that. But they have beat Syracuse; they have done their job all year long. I really don’t know why they were an 11 seed to be quite honest because like three of their losses are a total of five points. They have been right there with everybody.

And so this is a good basketball team from a good conference. You know, again, we’re going to have our work cut out for us. But I think home court; I think we’re on a mission; you know, Sam Logic, I think she’s pretty hard to defend.

I think you look at her on film and you watch Melissa’s shot on film, and you think, yeah, that’s pretty good, that’s a pretty quick shot. But until you play against it, you don’t know what it’s like.