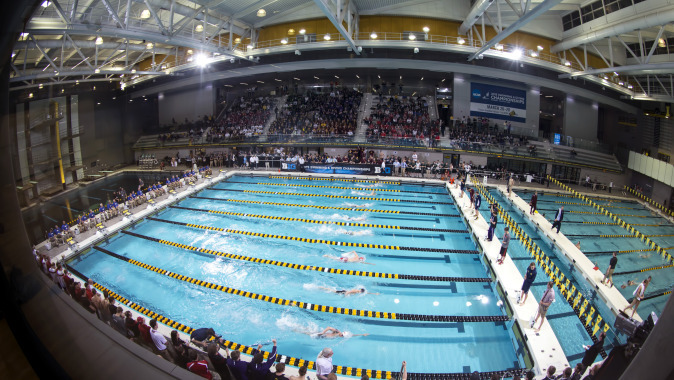 This Week
The No. 21 University of Iowa men’s swimming and diving team will host the 2015 NCAA Championships from March 26-28, inside the Campus Recreation and Wellness Center Natatorium (CRWC) in Iowa City.

Live Results
Fans can follow this week’s action at: livestats.hawkeyesports.com, and on the “Meet Mobile” swim meet application on cell phones and tablets. Download the application at this link: http://www.active.com/mobile/meet-mobile-app. Live diving results will be available at https://secure.meetcontrol.com/divemeets/system/index.php.

Watch the Action
All three preliminary sessions will be streamed live on Hawkeye All-Access on hawkeyesports.com. Friday and Saturday’s finals sessions will all be streamed live on ESPN3. Streaming of the diving preliminaries will be included in the preliminary sessions, and on Divemeets.com. ESPNU will re-air the Championships on April 8, 2015, at 4 p.m. (CT). Sam Gore will provide the play-by-play, Rowdy Gaines will be the swimming analyst, and Cynthia Potter the diving analyst.

Scouting The Field
The Hawkeyes will join 270 student-athletes representing 57 institutions as they unite at the CRWC Natatorium to determine who will be crowned a national champion.

Long Era in the NCAAs
The Hawkeyes had their highest finish at the NCAA Championships under Marc Long during the 2011-12 season. Iowa finished 26th overall.

Junior Addison Boschult: Boschult, an Omaha, Nebraska, native, will dive from the platform competition following a runner-up finish at the 2015 NCAA Zone D Diving Championships in Iowa City. Highlighting the final day of competition, his six-dive score of 409.20 in the platform finals was a UI school record and helped propel his overall score to second-place, finishing with 796.90 points.

UI Head Coach Marc Long
Marc Long is in his 11th season as head coach for the University of Iowa swimming and diving team, and 10th leading both the men and women’s squads. He served two seasons as the Iowa women’s assistant coach (2003-04) before taking over the helm for the 2004-05 season. He also served as the Hawkeye men’s assistant coach from 1998-2001. Iowa has 112 automatic or provisional qualifying times for the NCAA Championships and 87 school records have fallen under Long’s watch. He has also coached 14 NCAA All-Americans, and multiple former Hawkeyes have competed on the biggest stage in the Olympic Games.

UI Diving Coach Todd Waikel
Todd Waikel is in his third season as the diving coach with the University of Iowa swimming and diving program. During the 2013-14 season, seven UI divers qualified for the NCAA Zone D Diving Championships. The Hawkeyes got a pair of top-five finishes and school records on the platform at the zones by sophomore Addison Boschult and freshman Callie Head. Under Waikel’s watch, Iowa diving has turned into a major player on the national diving scene as USA Diving recognized Hawkeye diving as “Center of Excellence” for 2014. Much of the attention can be attributed to former All-American Deidre Freeman, who has excelled under Waikel’s coaching.