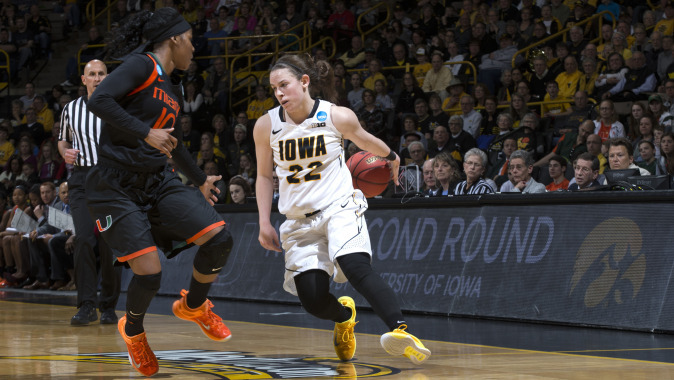 IOWA CITY, Iowa — University of Iowa women’s basketball senior point guard Samantha Logic has been named a Women’s Basketball Coaches Association (WBCA) All-Region 6 selection for the second-straight year. Logic is among 52 candidates nationally that will be considered for the 10-member WBCA Division I Coaches’ All-America Team.

The 2015 WBCA Division I Coaches’ All-America Team will be announced at 12:10 p.m. (CT) on Saturday, April 4, during NCAA® Women’s Final Four® Super Saturday festivities in Amalie Arena in Tampa, Florida.

Logic, named a second team All-American by ESPN, is also 1-of-5 finalists for the Nancy Lieberman Award, and 1-of-15 players named to the ballot for the John R. Wooden Award, a 2014-15 `Wade Watch’ candidate, to the Naismith Trophy Women’s Midseason 30 List, and to the Dawn Staley Award Watch List.

Logic, a unanimous first team All-Big Ten pick for the second consecutive season, became the first Hawkeye since Alexander (2010, 2011) to earn a first team All-Big Ten honor more than once, and the ninth in program history. She has been recognized by the conference in all four seasons, earning third team honors as a sophomore and all-freshman team distinction.

Logic, the NCAA’s active career assists leader (884), ranks third in assists in Big Ten history and 13th in NCAA history. She leads the Big Ten and ranks third in the NCAA in the category this season (8.0), while also averaging 13.4 points and 6.9 rebounds per game. Logic, the Big Ten’s assists leader the last three years, is the only player nationally to average at least 11 points, seven assists, and six rebounds per game.

The 15th-ranked and third-seeded University of Iowa women’s basketball team (26-7) faces fifth-ranked and second-seeded Baylor (32-3) on Friday at 6:30 p.m. (CT) in the NCAA® Division I Women’s Basketball Oklahoma City Regional. The contest will be played at Chesapeake Energy Arena in Oklahoma City, Oklahoma.