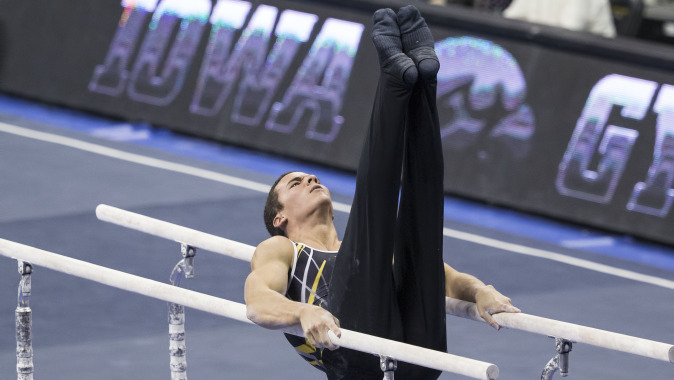 “I am disappointed with the results, but we had some great events,” head coach JD Reive said. “Pommel horse was great, rings was good, and we have five guys going into finals tomorrow. I wasn’t disappointed with how we performed overall as a team, we didn’t have enough and just got beat tonight. There are plenty of things to work on and this was certainly a step in the right direction.”

Vault saw the Hawkeyes’ scores steadily rise throughout the rotation. Sophomore Andrew Botto’s 14.450 led all Hawkeyes on vault and placed him tied for 21st overall. Dobre-Mofid recorded a 14.400, finishing tied for 23rd on the event.

Typically a difficult event for the Hawks, the team qualified two gymnasts for individual finals on pommel horse and scored a 71.450 on the event. Hodges (14.500) placed eighth and Sullivan (14.450) finished tied for ninth, both making the cut for day two. Freshman Elijah Parsells (14.400) was bumped out of the finals by Sullivan after finishing 11th.

The Big Ten Championships conclude Saturday with individual event finals set to begin at 6 p.m. (CT). The finals will be shown live by the Big Ten Network.