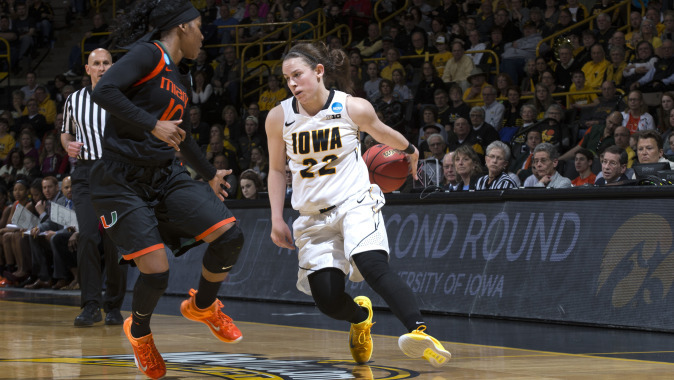 IOWA CITY, Iowa — University of Iowa women’s basketball senior point guard Samantha Logic has been named an All-American by the Associated Press. Logic was named to the third team.

“This is another great and well-deserved honor for Sam,” said UI head coach Lisa Bluder. “We are proud of all the accomplishments and awards that she is achieving at the end of her Hawkeye career.”

Last week, Logic was named a Women’s Basketball Coaches Association (WBCA) All-Region 6 selection for the second-straight year. Logic is among 52 candidates nationally that will be considered for the 10-member WBCA Division I Coaches’ All-America Team. She is the first Hawkeye since Kachine Alexander in 2010-11 to earn multiple all-region honors, and the fifth in program history, joining Alexander, Michelle Edwards (1987, 1988), Toni Foster (1992, 1993), and Franthea Price (1989, 1990).

Logic, named a second team All-American by ESPN, is also one of five finalists for the Nancy Lieberman Award, and was one of 15 players named to the ballot for the John R. Wooden Award. She was a 2014-15 `Wade Watch’ candidate, named to the Naismith Trophy Women’s Midseason 30 List, and to the Dawn Staley Award watch list.