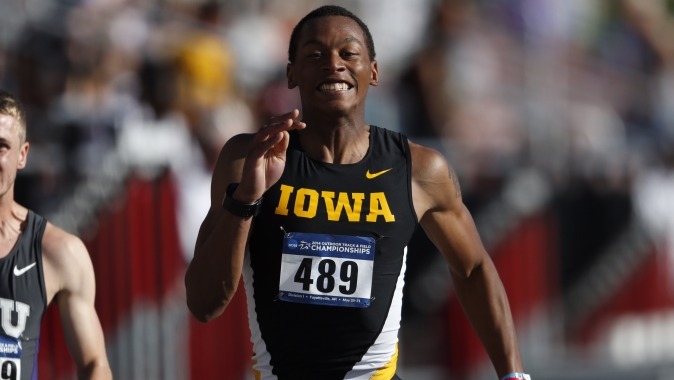 THIS WEEK
The University of Iowa track and field team splits competitors this weekend at the Florida Relays in Gainesville, Florida, the San Francisco State Distance Carnival in San Francisco, and the Stanford Invitational in Palo Alto, California, from April 3-4.

The Florida Relays is hosted at the James G. Pressly Stadium on the University of Florida campus with competition beginning Friday at 9 a.m. (CT).

MALLETT WINS B1G HONOR
Sophomore Aaron Mallett was named Big Ten Track Athlete of the Week when he notched a first-place finish in the 110-meter hurdles in a personal best 13.85 at the Baldy Castillo Invite in Tempe, Arizona, on March 21. That time ranks sixth in program history. He anchored the runner-up 400-meter relay of sophomore Vinnie Saucer, Jr., junior Brendan Thompson, and junior James Harrington. The weekly honor is the first of Mallett’s career.

MEET THE RECORD HOLDERS
Brittany Brown returns as the school-record holder in the women’s 200 meters. The sophomore rewrote the record books at last year’s NCAA West Preliminary when she cruised to the finish in 22.95, becoming the first Hawkeye to run under 23 seconds.

NEXT ON THE BLOCK
Iowa returns to action April 17-18 at the Mt. Sac Relays in Walnut, California.