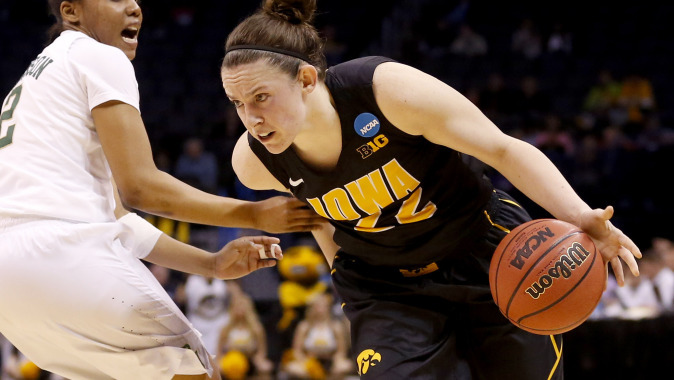 IOWA CITY, Iowa — For the first time since she first picked up a basketball, Samantha Logic isn’t in control. And she’s alright with that — embraces it, actually.

Logic, a 5-foot-9 do-everything point guard, is in Connecticut this week, awaiting her fate with the Women’s National Basketball Association (WNBA). Will it be Seattle? Tulsa? Connecticut? Chicago? Indiana? Let the guessing begin.

Before Logic dreamed of playing for the University of Iowa women’s basketball team, she dreamed of the WNBA. When you’re as talented as Logic, those aspirations were not putting the cart in front of the horse. In two days she will be a professional basketball player.

“I can’t control anything right now, so I’m having fun with it,” Logic said. “I am so blessed to be able to go (to the WNBA Draft). Not many people are invited to even be there, so I’m going to take every opportunity to learn what I can those first couple days. What happens after that I don’t control, so I don’t worry about it.”

Since then, Logic has rested, and rest is something she hasn’t been able to enjoy since August. On Sunday she drove to Madison, Wisconsin, to support the UI softball team during its 3-2 win over the Badgers. On Monday she flew to Connecticut. Today and Wednesday she will orient on how to act as a professional, learning everything from managing money to living on the road.

“It is a unique experience,” Logic said. “It’s something you work for and I didn’t even know how it worked until this year. I’m excited for the opportunity and very blessed.”

The WNBA Draft is Thursday at Mohegan Sun Arena in Uncasville, Connecticut. The Draft begins at 6 p.m. (CT); the first round will be televised by ESPN2, the second and third rounds will air on ESPN3.

Logic will be the 12th Hawkeye drafted into the WNBA. The most recent was Kachine Alexander, who was selected by Minnesota in the third round (26th overall) of the 2011 Draft. The last first-rounder was Toni Foster, the eighth selection in 1997 by Phoenix.

“It is going to be awesome,” Logic said. “Ever since you’re little, you dream of that. If my name is called, I don’t know if words will be able to describe it.”

Logic will return to campus after the Draft, graduating May 16 with majors in health and human physiology and sports studies. The next day she will leave for training camp. The WNBA regular season runs June 5-Sept. 13.

As far as where she will be selected doesn’t concern Logic.

“I have heard a couple different things, but I don’t look at the mock drafts,” Logic said. “Not knowing makes it more exciting for everybody.”