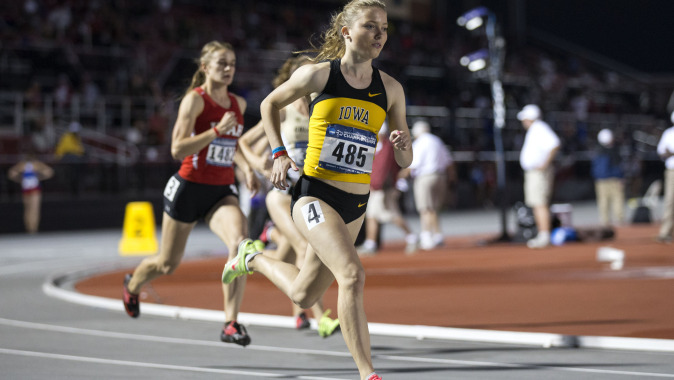 THIS WEEK
The University of Iowa track and field team competes at the Mt. Sac Relays on Friday and Saturday in Walnut, California. The meet begins at 12:15 p.m. (CT) Friday and continues Saturday at 1:50 p.m.

LIVE RESULTS
Live results will be available on the schedule page of hawkeyesports.com. Follow @IowaXC_TF on Twitter for updates on the team.

HARRINGTON, TROST @IOWAXC_TF ATHLETES OF THE WEEK
The University of Iowa track and field program named junior James Harrington and sophomore Katharina Trost athletes of the week following their first-place finishes at the Jim Duncan Invitational in Des Moines, Iowa, on April 11. Harrington set a new meet record in the men’s 200 meters against -2.6 mile per hour wind, posting a winning time of 21.04. ?Trost led the women’s 800 meters from start to finish, crossing the line in a season best 2:09.28, a time that ranks eighth in the Big Ten.

VANCLEAVE DEBUTS
Senior Kaleb VanCleave opened his outdoor sesaon with a career-best performance in the men’s 400 meters at the Jim Duncan Invitational. The Des Moines, Iowa, native is the season leader in the event after finishing second in 47.68.

HAVING A FIELD DAY
Three Hawkeyes own marks that rank among the top 10 in school history in the men’s javelin. Junior Sam Joens appears fifth on the list at 210-1 feet (64.03m), while senior Jack Eckert (188-9 ft., 57.53m) falls ninth. Sophomore Alex Balke captured the 10th spot following a second-place finish at the Jim Duncan Invitational in a personal best 184-5 feet (56.22m).

CONFERENCE LEADER
Sophomore Aaron Mallett holds the top 110-meter hurdle spot in the Big Ten for the second consecutive week following his seventh-place finish at the Florida Relays on April 3. He was the first collegian to cross the finish in 13.60, a time that ties for second in the nation and ranks second at Iowa.

BROWN DOUBLES IN BIG TEN RANKINGS
Sophomore Brittany Brown is one of two athletes ranked among the top five in both the 100 and 200 meters in the Big Ten. Following her performances at the Florida Relays, Brown leads the conference in the 200 meters at 23.32 and holds the fifth-fastest time in the 100 meters at 11.70. Erin Hawkins of Minnesota (100m/4th; 200m/5th) joins Brown in the conference rankings.

IN THE RANKINGS
The University of Iowa men’s track and field team is ranked at No. 25 in the U.S. Track & Field and Cross Country Coaches Association (USTFCCCA) Top 25 Division I National Team Computer Rankings released April 17.

THOUGHTS FROM WOODY
“We are heading into this meet with a lot of athletes ranked high in the Big Ten,” director of track and field Joey Woody said. “The competition is going to one of the best in the nation this weekend, so it gives our athletes another opportunity to continue to build towards the Big Ten Championships.”

NEXT ON THE BLOCK
Iowa returns to action at the Drake Relays in Des Moines, Iowa, from April 22-26.