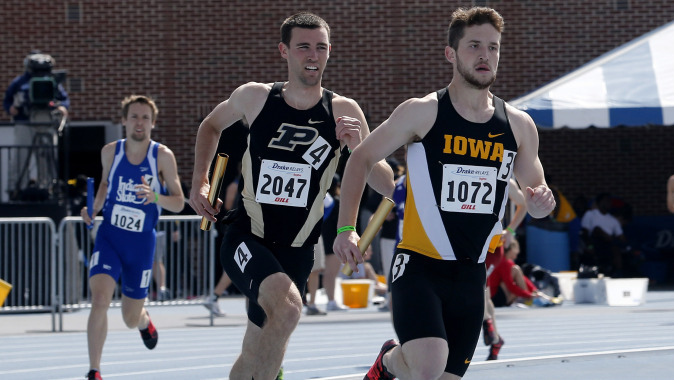 NORWALK, Calif. — The University of Iowa track and field team capped a successful trip to the Golden State this weekend with eight career bests at the Beach Invitational hosted by Long Beach State University on Saturday. The event was held at Cerritos College in Norwalk, California.

“We had one of the best meets since I’ve been at Iowa,” director of track and field Joey Woody said.

The Hawkeyes got off to a solid start in the field events when freshman Jahisha Thomas leaped to a second-place finish in the women’s long jump. The London native recorded a personal-best mark of 19-08.25 (6.00m), which moves her to fifth on Iowa’s all-time list and would rank third in the Big Ten. Junior Kassidy Ellis (18-04.25, 5.59m) finished 10th overall.

Junior Will Teubel also climbed to fifth on Iowa’s all-time list when he registered a career-best performance in his second 800-meter race of the weekend. The Lisbon, Iowa, native placed second, respectively, in 1:48.60. His time would also rank fifth among the Big Ten. Freshman Carter Lilly (1:50.38) finished 11th overall, while sophomore Katharina Trost (2:10.72) was the 12-place finisher in the women’s race.

“Will was one of the big highlights of the weekend,” Woody said. “He was coming off of a rough day yesterday and ran a huge PR today. Jahisha also had a great day today with a big collegiate PR.”

“This is a great sign of things to come over the next few weeks starting with the Drake Relays next weekend,” Woody said.

The Drake Relays begin April 22 and continue through April 26 at Drake University in Des Moines, Iowa.