Barta: From Ferentz to Field Hockey 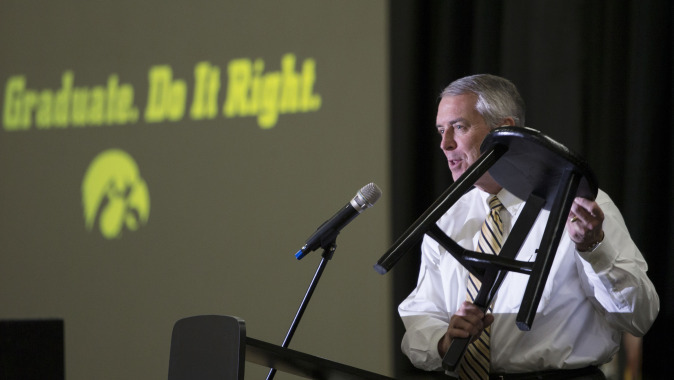 IOWA CITY, Iowa — So, how much ground can a NCAA Division I director of athletics cover in a little less than 60 minutes? Quite a bit, actually.

Gary Barta, the UI’s director of athletics, spent about an hour recently with a few members of the editorial staff of Hawk Talk Monthly. During that time he talked about Iowa’s climb in the Learfield Directors’ Cup standings, the improvements made in the UI baseball program under Rick Heller and the UI volleyball program under Bond Shymansky, the transition in the track and field program from Larry Wieczorek to Joey Woody, the UI and the UI Athletics Department’s commitment to work with the community to bring special events like the NCAA Division I Men’s Swimming and Diving Championship to Iowa City and the UI campus, and he talked about the transition of leadership in the UI’s field hockey program, a decision he knew would spark discussion regardless of the final decision he made.

Barta also talked about the UI’s head football coach, Kirk Ferentz, his and his staff’s commitment to providing Iowa’s coaching staff and its student-athletes the very best in facilities possible, the UI’s commitment to student-athlete well-being, the UI’s commitment to providing full “Cost of Attendance” to its student-athletes, the outstanding work done by Lisa Bluder, her staff, and the 2014-15 UI women’s basketball team, and the steady climb up the ladder by Fran McCaffery‘s UI men’s basketball program highlighted by its first NCAA Tournament victory in over a decade, and a little more like Iowa’s record-setting year in the classroom and more “Win. Graduate. Do it Right.” success stories.

Yes. An NCAA Division I director of athletics can, in fact, cover an awful lot of ground in an hour.

What follows are edited excerpts of this year’s “One-on-One with Gary Barta.” A transcript of the full interview will be available later this week inside the May 2015 edition of Hawk Talk Monthly presented by Transamerica.

Barta on the hiring of a new president at the UI…
…that said, there’s a little bit of apprehension across campus, because whenever the leadership changes, you wonder what the future holds. I would argue this, though. When any of us come and go to this great university, it’s so much bigger than any one person. I’m grateful for Sally’s leadership, but I’m also confident we’re going to find a great leader.

Barta on the facilities available to the UI’s 650 student-athletes…
We now have — when you take Kinnick Stadium and that renovation that was completed in ’06 — you take the operations center, the indoor facility and the outdoor fields…and, I agree, we have one of the best football complexes in America. That on top of a great swimming and diving natatorium, a new golf practice facility. We just created a new gymnastics facility. Our rowing facility is superior. The list goes on and on.

Barta on Kirk Ferentz…
I’ve worked with a lot of coaches over the last 30 years, and I’ve not been with a coach that’s as strong all the way throughout, in terms of coaching ability, leadership, passion for the sport, understanding of the sport, putting together a coaching team, commitment to academics. At Iowa, he’s proven he can win at a very high level. If I decided he no longer had that passion, he no longer was able to lead this team, we have the ability to make a change financially. So there’s no golden handcuffs. There’s nothing holding us back.

Barta on the transition of leadership in the UI’s field hockey program….
We had had some issues of student-athlete well-being surface through an investigation, and so I knew that was at stake. I also knew I had one of the most successful coaches in our program, and if I changed leaders, that was going to create angst. And so I decided to make a change in leadership. It was in concert with the President’s Office and General Counsel and HR. But I sat there knowing that no matter which way I went, this was going to be a challenging decision.