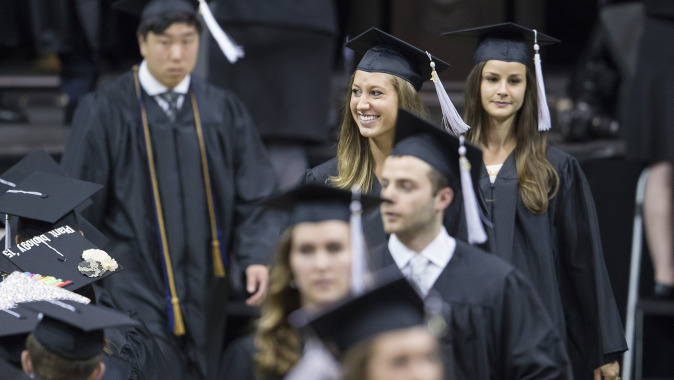 IOWA CITY, Iowa – The University of Iowa’s volleyball, soccer, women’s swimming and diving, and men’s golf teams were among the NCAA Division I intercollegiate athletics programs singled out today by the NCAA for Academic Progress Reports (APR) in the top 10 percent of all teams in their specific sport.

Every NCAA Division I institution calculates an APR for each athletics team each academic year. The APR provides a real-time look at a team’s academic success each semester or quarter by tracking the academic progress of each student-athlete. The APR includes eligibility, retention, and graduation in the calculation and provides a clear picture of the academic culture in each sport.

Iowa’s women’s swimming and diving program was one of just three peer programs in the Big Ten Conference to be singled out by the NCAA.

“I’m proud of our athletes, coaches, and our department for its commitment to high academic and athletics standards,” said UI swimming and diving coach Marc Long.

“It’s the foundation of the culture we have built inside the swimming and diving program. We expect and work tirelessly to ensure that each team member has the elite support, resources, and tools necessary to achieve their full academic and athletic potential.”

The success of the UI’s men’s golf and soccer teams was matched by only three peers in the Big Ten, and the Iowa volleyball program had four Big Ten peers achieve at the same level academically that it did.

“We are so proud of the tremendous work that all of our student-athletes put into achieving academically each year,” said UI volleyball coach Bond Shymansky.

“It is crucial to me that every player graduates and becomes a valued member of their community. Our women know that when they take their Iowa diploma into the work force that they will be a force to be reckoned with.” The NCAA will release 2014-15 APR statistics for all intercollegiate athletics programs involved in NCAA Division I competition – including the 24 men’s and women’s programs at the UI – later this month. Last spring, all of the sports programs at the UI were achieving academically at a rate that surpassed the national benchmark.

The NCAA’s Academic Progress Rate (APR) report for 2013-14 revealed that – for the fifth consecutive year – all of Iowa’s 24 sports programs were well above the 930 threshold that signals a red flag with respect to academic progress. The highlights of results for the UI’s student-athletes include:

Seven UI teams scored a perfect 100 on their GSR: Men’s basketball, field hockey, men’s golf, women’s golf, softball, men’s tennis, women’s tennis, and volleyball. All counted, the GSR for 18 of Iowa’s 24 teams was better than the national average among its peer sport group.

The NCAA introduced the GSR in 2005 to more accurately assess the academic success of student-athletes. Unlike the federal graduation rate, the GSR holds institutions accountable for transfer students. The GSR also accounts for mid-year enrollees and is calculated for every sport.