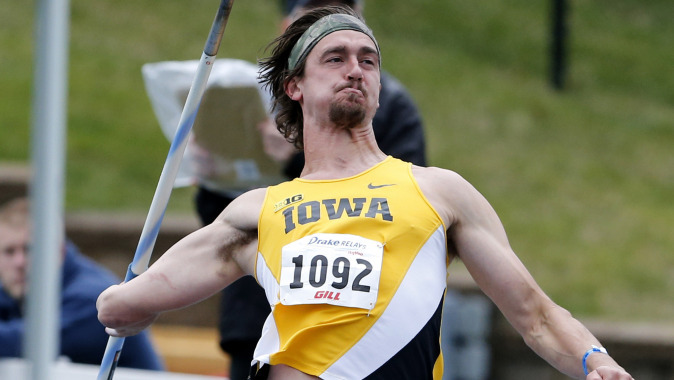 THIS WEEK
The University of Iowa track and field team travels to Austin, Texas, this week to compete at the 2015 NCAA Outdoor Track and Field Championships. The NCAA West Preliminary Round is held at Mike A. Myers Stadium beginning Thursday at 12 p.m. (CT). Friday’s competition begins at 12 p.m., and the last event is Saturday at 9:45 p.m.

LIVE RESULTS
Live results and Championships Central links are available on the track and field schedule page on hawkeyesports.com. Follow @IowaXC_TF on Twitter for updates on the team throughout the weekend.

HAWKEYE QUALIFIERS
The Hawkeye men are represented by a total of 15 student-athletes competing in 13 individual events and two relays. The men are seeded 12th or higher in five events. Aaron Mallett and Babatunde Amosu, both reigning Big Ten champions, are the highest seeded Hawkeyes. Mallett is the No. 2 seed in the 110-meter hurdles, and Amosu is seeded fourth in the triple jump. Ten Hawkeye women qualified for 11 individual events and one relay. Big Ten champion Elexis Guster is seeded eighth in the 400 meters, and 2014 All-American Brittany Brown is seeded sixth in the 200 meters. The men’s and women’s 400-meter relays are seeded eighth. Both teams advanced to the NCAA final site last season. The men placed sixth at the NCAA finals to earn first team All-America honors, and the women placed 11th to earn second team honors.

RETURN OF THE 1,600-METER RELAY
The men’s 1,600-meter relay returns to the NCAA Championships following a two-year hiatus. Mitch Wolff, Brendan Thompson, Aaron Mallett, and Brennan Davey won the Mt. Sac Relays in 3:08.23 to earn the No. 8 seed at the West Regional. The quartet also placed third at the Big Ten Championships. Iowa is sending it’s 4×4 team to the NCAA Championships for the first time since 2012, when Davey teamed with Justin Austin, Ethan Holmes, and Erik Sowinski. The 2015 group is looking to advance to the final site for the first time since Steven Willey, Patrick Richards, Sowinski, and Chris Barton in 2011.

GUSTER CARRIES THE GOLD
For the second straight year, sophomore Elexis Guster enters the NCAA Championships as the reigning Big Ten Champion in the women’s 400 meters. Guster defended her Big Ten title May 17 in East Lansing, Michigan. She clocked a personal best 52.19 in the conference finals, earning the No. 8 seed in the West Regional and climbing to No. 3 on Iowa’s all-time top performers list. She is attempting to become the first Hawkeye to advance to the NCAA final site in the 400 meters since Kineke Alexander in 2008.

400-METER RELAY STRONG
Both the men’s and women’s 400-meter relays return to the NCAA Championships following 2014 All-America performances. Lake Kwaza, Elexis Guster, MonTayla Holder, and Brittany Brown placed 16th at the 2014 NCAA Championships. The quartet is seeded No. 8 in the West Regional with a time of 44.71, which they set in a silver medal performance at the Big Ten Championships. The Iowa men are also the No. 8 seed. Vinnie Saucer, Jr., Aaron Mallett, James Harrington, and Keith Brown clocked the fourth-fastest time in school history this season (39.66) at Musco Twilight on May 2. Harrington and Brown ran the third and fourth legs when the Hawkeyes raced to a sixth place finish at the 2014 NCAA Championships. Tevin-Cee Mincy and O’Shea Wilson ran the first two legs.

CRAMMING FOR FINALS
Eight Hawkeyes are aiming for a return trip to the NCAA final site. Klyvens Delaunay qualified in triple jump in 2013, placing eighth and earning first team All-America honors. Babatunde Amosu qualified in the same event in 2014 and finished 13th. The Hawkeyes have advanced a triple jumper to the final site every year since 2011 (Troy Doris, 2011-12). Lake Kwaza, Elexis Guster, MonTayla Holder, and Brittany Brown advanced to the final site in 2014, placing 16th in the 4×1. Brown also qualified in the 200 (11th), and Holder in the 400-meter hurdles (23rd). James Harrington and Keith Brown are aiming for a return trip as members of the 4×1. Harrington ran the third leg, and Brown the fourth on Iowa’s sixth-place team in 2014.

NEXT ON THE BLOCK
The NCAA Championships is set for June 12-15 in Eugene, Oregon.