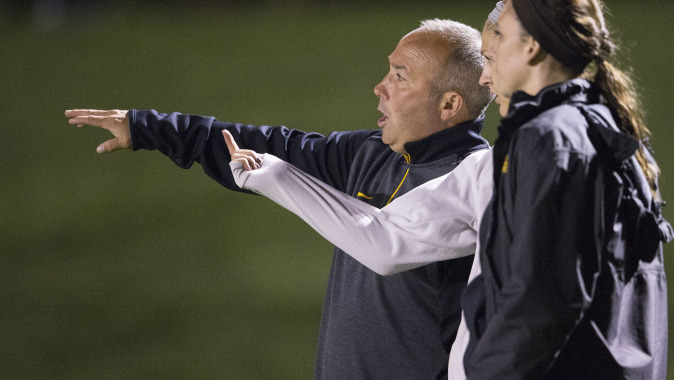 Iowa opens the 2015 slate with an exhibition contest at Illinois State — a program that advanced to the second round of the NCAA Tournament a season ago — on Aug. 14 before kicking off the regular season with four straight home contests.

Following a two-game road trip, where Iowa will face Utah State and Montana on Sept. 4 and Sept. 6 in Missoula, Montana, the Hawkeyes return home for a pair of games. Iowa faces Iowa State on Sept. 11 in an Iowa Corn Cy-Hawk Series matchup before welcoming Illinois Chicago to town Sept. 13 for its final nonconference game.

The Hawkeyes open Big Ten play on the road, squaring off against Michigan State and Michigan on Sept. 18 and Sept. 20. It is Iowa’s second straight trip to the Great Lake State.

Iowa closes out September by welcoming Ohio State (Sept. 25) and Penn State (Sept. 27) to Iowa City for a pair of home contests. The Nittany Lions won the Big Ten regular season title and advanced to the Elite Eight last season.

Following an Oct. 3 road date at Indiana, the Hawkeyes play four of their final six games in Iowa City, beginning with a Thursday night matchup against NCAA qualifier Wisconsin on Oct. 8. Iowa then welcomes Minnesota to town on Oct. 11 in a game that will be televised live on BTN.

The Hawkeyes’ final regular season road trip begins with an Oct. 15 game at Illinois and Iowa will face Northwestern at Toyota Park — the home of Major League Soccer’s Chicago Fire — on Oct. 18 in Bridgeview, Illinois.

Iowa’s final homestand begins with an Oct. 23 matchup against Nebraska before the Hawkeyes close out the regular season by hosting 2014 NCAA Tournament qualifier Rutgers on Oct. 28.

The 2015 Big Ten Tournament quarterfinals will be played at the campus sites of the top four seeds on Nov. 1 with the semifinals and final the following weekend at the highest remaining seed.

The Hawkeyes finished 14-7-1 in DiIanni’s first year as head coach and advanced to the title game of the 2014 Big Ten Tournament. Iowa returns five starters and 18 letterwinners in 2015.