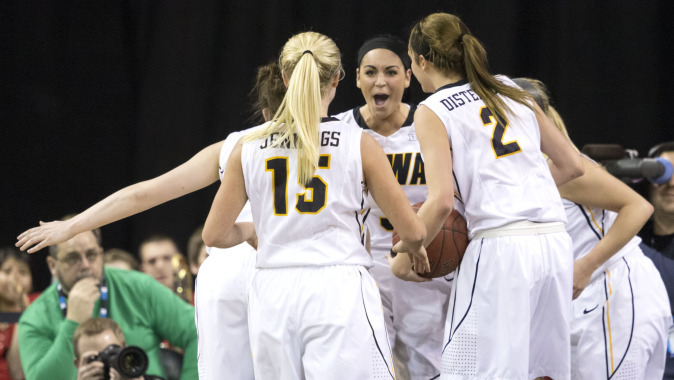 IOWA CITY, Iowa — The NCAA Playing Rules Oversight Panel approved a new format for NCAA women’s basketball games on Monday. The adjusted format will be in place this fall.

The games will be played in four 10-minute quarters next season, moving away from the 20-minute halves format the sport has had in the past. The change, designed to enhance the flow of the game, was endorsed by the Women’s Basketball Coaches Association Board of Directors.

“These are some big changes to our game,” University of Iowa head coach Lisa Bluder said. “We haven’t seen significant changes like this in a long time.

“I’m not sure that I really like the changes, but that’s the way the game is going to be played. I didn’t think our game was broken. You can see that some of the men’s rules are going to our former rules and now here we are moving to more of an international look in the women’s game. These changes will definitely speed up the game and make it more offensive minded.”

Teams will reach the bonus and shoot two free throws on the fifth team foul in each quarter, rather than reach the one-and-one bonus on the seventh team foul of each half and reach the double bonus on the 10th team foul. Bluder sees this as a benefit for Iowa, a team that shot .757 from the charity stripe in 2014-15.

“We’re a really good free throw shooting team, so that change is an advantage for us,” Bluder added.

Advancing the Ball
? Teams can advance the ball to the frontcourt following a timeout immediately after a made basket in the last 59.9 seconds of the fourth quarter and any overtime periods.
? Teams can also advance the ball to the frontcourt after securing the ball from a rebound or a change of possession. In these scenarios the ball would be inbounded at the 28-foot mark on the side of the court where the scorer’s table is located.
? The committee made the initial recommendation because it felt the change would add more excitement to offensive possessions at the end of games since the teams would no longer have to travel the length of the court after inbounding the ball.

10-Second Backcourt Exceptions
? Teams do not receive a new 10-second backcourt count in the following scenarios.
? The ball is deflected out of bounds by the defense.
? There is a held ball and the possession arrow favors the offensive team.
? A technical foul is called on the offensive team while the ball is in its backcourt.

Post Defense
? Defenders are allowed to place a forearm or an open hand with a bend in the elbow on an offensive post player with the ball whose back is to the basket. Bands and Amplified Music
? Bands or amplified music may be played during any dead-ball situation during a women’s basketball game.
? Previously, rules allowed music to be played only during timeouts and intermission.
? This change was made in an effort to improve the overall fan experience.

The committee will discuss additional rule changes during a conference call scheduled for June 24. Proposals up for discussion are listed below.

Proposals
? Under the new proposal, one media timeout in televised games would be permitted for each quarter. Media timeouts would occur at the first dead ball at or below the five-minute mark of each quarter and at the end of the first and third quarters. However, if a team calls timeout before the five-minute mark, that would be treated as the media timeout. Additionally, the first called team timeout in the second half would be treated as a full media timeout.
? In the proposed format change, teams would have four timeouts (three 30-second timeouts and one 60-second timeout). A team may use the 60-second timeout at the discretion of the coach during the first or second half of the game. Teams would be allowed to carry over three of those timeouts into the second half. The committee’s original proposal recommended that teams be allowed to carry only two timeouts into the second half.
? Each team would be awarded one 30-second timeout in each overtime period, plus any unused timeouts remaining from the second half. In non-televised games, teams would have five timeouts (three 30s and two 60s). As many as four of the timeouts could carry over into the second half.
? The committee also recommended that, in the last two minutes of the game, officials can determine whether a shot-clock violation occurred by looking at when the clock runs down to zero in addition to listening for when the buzzer sounds.