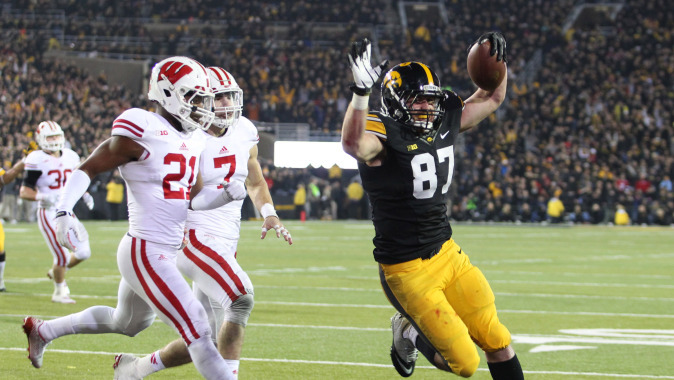 IOWA CITY, Iowa — University of Iowa senior tight end Jake Duzey has been named to the 2015 John Mackey Award Watch List. The announcement was made Wednesday by the Mackey Award Committee. The John Mackey Award is presented annually to college football’s most outstanding tight end.

Iowa’s third leading receiver in 2014, Duzey (6-foot-4, 248-pounds) played in all 13 games and led all Big Ten tight ends with 36 receptions, gaining 392 yards receiving, while reeling in three touchdowns. As a sophomore in 2013, Duzey recorded 138 yards (six catches, one touchdown) receiving against Ohio State, the most by a tight end under head coach Kirk Ferentz.

Dallas Clark, who was honored in 2002, is Iowa’s only Mackey Award winner. The award was first introduced in 2000.

Iowa opens the 2015 season hosting Illinois State on Sept. 5 inside Kinnick Stadium. This will be the first ever meeting between the two schools. Tickets are available for purchase by contacting the UI Athletic Ticket Office at (800) IA-HAWKS and online at hawkeyesports.com.