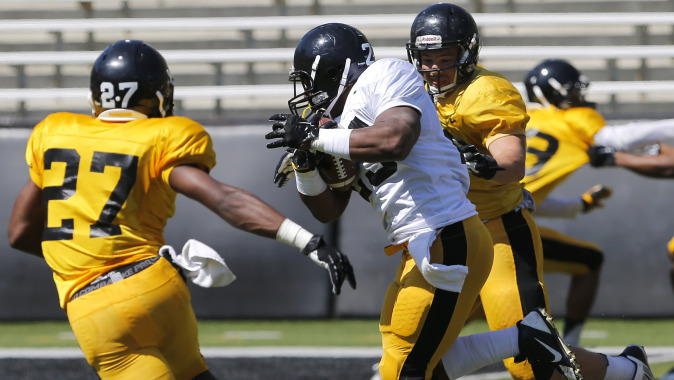 IOWA CITY, Iowa — Morning practice is new to the University of Iowa football program, but it is not unique among the Hawkeyes’ Big Ten Conference peers.

At least three other teams: Indiana, Maryland, and Northwestern practice in morning — and all three love it.

“I’m not a morning guy, but it is the best thing for us,” said Indiana head coach Kevin Wilson.

“Our players love it. They wouldn’t want it any other way,” said Maryland head coach Randy Edsall.

The primary reason for practicing in the morning is academics. At Indiana, more courses are offered between 2-5 p.m. than from 8-9 a.m. Classes at Northwestern don’t begin until after 9 a.m., so student-athletes miss just the first two blocks of class.

“When we were in the afternoon, you missed 2, 3, 4, 5 and even 6 o’clock (classes),” Fitzgerald said. “We have quite a few guys that redshirt and go to grad school and we have a lot of night classes. We were losing guys early and then losing our older guys to go to grad school classes (in the evening).”

Edsall first looked into morning practices on the advice of George O’Leary, who he worked for at Georgia Tech. Edsall wanted to implement the morning plan when he was head coach at Connecticut, but it didn’t materialize. It has worked well at Maryland.

“Now the kids get up in the morning and they are fresh and alert,” Edsall said. “Then the football part is out of the way and they take care of the academic part.”

Terrapins defensive back William Likely is sold on the morning approach. He says it gives him more time to kick back and stay off his feet.

“I definitely like it,” Likely said. “You get practice over in the morning so that gives you more time to watch film or do anything you want as opposed to practice in the evening.”

Another advantage to early workouts, according to Edsall, is cooler temperature.

“Depending on where you’re located, you go out and practice in the morning and you don’t have heat and humidity that will wear your guys down,” he said. “In the morning it might be a little cooler. You save the wear and tear on bodies.”

For football junkies like Indiana quarterback Nate Sudfeld, the morning approach is up his alley.

“I love it because it is the first thing you do when you wake up,” Sudfeld said. “You go to bed thinking about football, you wake up, you go do it, and then you’re ready for the rest of your day. I see nothing negative about it. I don’t know why other teams don’t do it — it has been great for us.”

“It makes it easier because you wake up and practice,” he said. “It wakes you up for the rest of the day. Then you can come back at night and get some meetings in.”

“You have a lot of time to get other stuff done: school work, film, and you can schedule a lot of things in the afternoon,” Jones said.

One constant Fitzgerald wants the Wildcats to schedule into their evening routine is an early bed time.

“The No. 1 abundant commodity of college-aged guys is sleep,” Fitzgerald said. “They are going to sleep. We wanted to put (sleep) at the right time. When I was a student-athlete, we would practice in the afternoon and I stayed up all night.”

Wilson, too, is concerned about sleep habits of his players because it was an adjustment for the Hoosiers to crawl in and out of bed at an earlier hour than most college students.

“But at the same time, it curtailed a lot of midweek activity,” Wilson said.

Indiana players are served a continental breakfast before practice and lunch after.

“They have had a physical exertion, a shower, and two meals before they get to the academic day,” Wilson said.

Practicing in the morning isn’t exclusive to the Big Ten. Other teams known for early football workouts include Boston College, Old Dominion, and Oregon.