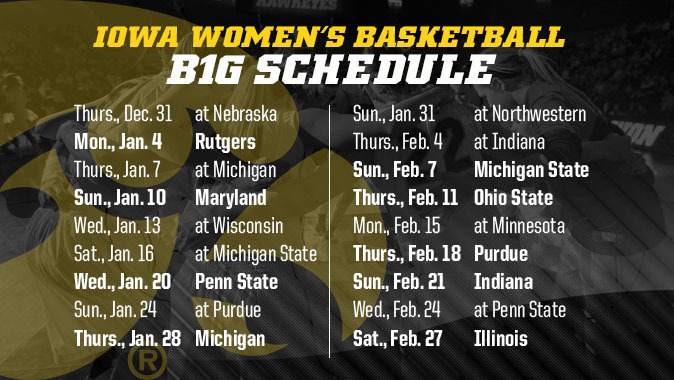 Iowa kicks of the regular season in Iowa City, facing North Dakota (Nov. 13) and Tennessee-Martin (Nov. 15) in the annual Hawkeye Challenge from Nov. 13-15.

As a part of the annual B1G/ACC Challenge, Iowa will travel to Charlottesville to face Virginia on Dec. 2, before heading home to meet Robert Morris inside Carver-Hawkeye Arena on Dec. 6.

Iowa’s nonconference slate continues with the annual Iowa Corn Cy-Hawk Series matchup at Iowa State on Dec. 11, and comes to a close with home contests against Bradley (Dec. 19) and Drake (Dec. 22).

The Hawkeyes open their 18-game Big Ten Conference schedule at Nebraska on Dec. 31, before returning to Iowa City for a matchup with Rutgers on Jan. 4.

Iowa will play five conference teams both home and away and eight teams once. Each team will face four of its single-play opponents at home and four on the road. To view Iowa’s Big Ten single-plays and home-and-away opponents, see below:

The Hawkeyes’ conference home slate includes four weekend games, four midweek matchups, and one Monday contest. Start times and television information will be released at a later date. The Big Ten Tournament will be held at Bankers Life Fieldhouse in Indianapolis, Indiana, from March 2-6.

Iowa returns 10 letterwinners from a team that advanced to the Sweet 16, made its Big Ten best eighth-straight NCAA Tournament appearance, and finished with a 28-6 overall record last season.