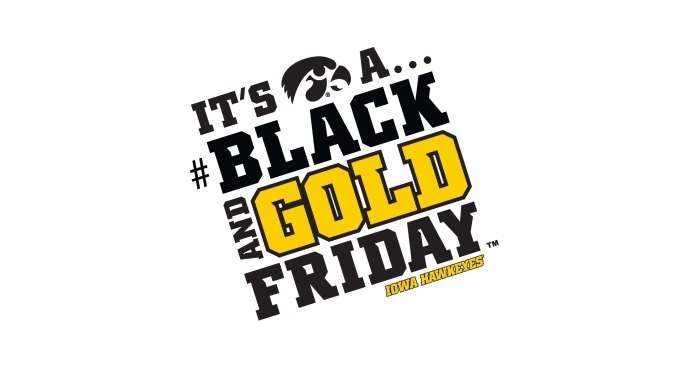 IOWA CITY, Iowa — The UI Alumni Association and the UI Athletics Department are partnering on an exciting new project that aims to raise the level of excitement and anticipation of football Saturdays on the UI campus and the greater Iowa City/Coralville area.

The effort — which builds on activities that were already being executed on game week Fridays by the UI Alumni Association’s Students Today, Alumni Tomorrow (S.T.A.T.) student group — is called “Black and Gold Fridays,” which encourages fans of the Hawkeyes on the UI campus and in the Iowa City/Coralville community to wear black and gold attire on Fridays on football game weeks.

“Iowa’s fans have never been shy about showing their support for the Hawkeyes. `Black and Gold Fridays’ offers them the opportunity to let their Hawkeye spirit show,” said Jeff Keuter, President and CEO of the University of Iowa Alumni Association.

Generally, the effort has as its primary goal to raise even higher the level of excitement about the following day’s football game at historic Kinnick Stadium among the greater University of Iowa community and fans of the Hawkeyes who will be arriving on the Friday of a football game week. Much of this will be accomplished through “messaging” — both social and traditional — but there will also be elements of fun and surprise and engagement.

Teams of UI students from UI Student Government, the Hawks Nest of the UI Athletics Department, and S.T.A.T. of the UI Alumni Association will team with Herky to canvas the UI campus and surrounding communities on “prize patrols,” rewarding fans who are dressed in black and gold, and encouraging others to join the fun of a football weekend here in one of the best college towns in the country!

At the present time, plans call for “patrols” in the early morning, over the lunch hour, and late afternoon each Friday prior to a home game of the Hawkeyes. The noon patrol will also likely include a special “mini-event” on the Pentacrest.

“Our goal is to ramp up the excitement on our campus and in the community on Fridays. Iowa City is one of the great college towns in the country. If any place can do this and do it well, the greater Iowa City community can.”

Klatt said another objective of the program is to use the “Black and Gold Fridays” platform to promote other events happening on the UI campus on Friday, Saturday, and Sunday of the football weekend. That list, of course, includes the new Friday luncheons and Friday night pep rallies that are part of the Johnson County I-Club’s new “Kickoff Off New Traditions” initiative in addition to home events of the UI’s intercollegiate athletics teams, and cultural and campus events and activities.