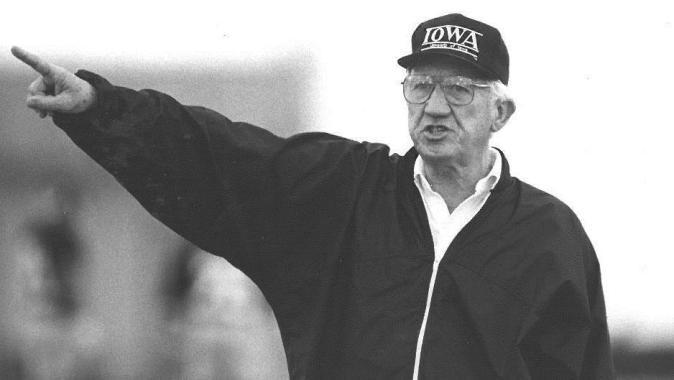 IOWA CITY, Iowa — A labor and delivery doctor from Eastland, Texas, probably never knew he brushed with greatness during a three-month stretch in 1929.

“It is unbelievable to be in a place like this with such great people,” Brashier said. “The University of Iowa was great for us and our family. We could have gone back to Texas — people thought we would probably do that — but we said, `No, we’re going to stay right here in Iowa City.'”

The Brashier and Fry families were close until the Fry’s moved from Eastland to Odessa, Texas. Even though they went separate ways, Bill and Hayden stayed in touch. Brashier coached at four high schools and Texas-El Paso before the duo reunited at North Texas.

“Hayden called me, we talked, and he said I could coach anything I wanted,” Brashier said. “I knew he was a great offensive coach, so I coached the defense.”

Brashier was part of the original coaching staff when Fry was named head coach at the University of Iowa in 1979. For the next 17 seasons — with Brashier as defensive coordinator — the Hawkeyes were 124-73-6 with seven shutout victories, 12 bowl berths, and five bowl victories.

The final game Brashier coached — a 38-18 win over Washington in the 1995 Sun Bowl — is his most memorable.

“That last game was probably the biggest one in my mind because we had lost to Washington a couple times in the Rose Bowl (1982, 1991),” Brashier said. “To beat them in the Sun Bowl was the outstanding game in my career that I remember the most.”

Student-athletes who played for Brashier were named first-team All-Big Ten 40 times and eight were selected first or second-team All-America. Defensive end Leroy Smith was the Big Ten Defensive Player of the Year in 1991. Under Brashier, the Hawkeyes had four top 10 defenses in the NCAA and they led the Big Ten in forced turnovers three times.

Brashier always fancied defense, because as he said, “if they don’t score, they can’t beat you.”

“I have always thought that if you have a good defense, you have a chance,” Brashier said. “If you don’t have a very good defense, then you have to outscore people. You would rather be able to stop them.”

In 1989, Iowa fans selected an all-time team, and four of the first-teamers played for Brashier: Andre Tippett (end), Mark Bortz (line), Dave Haight (line), and Larry Station (linebacker). According to Brashier, the Hawkeyes got the most out of defensive back Bobby Stoops.

“I always thought Bobby Stoops was one of the best we ever had,” Brashier said. “He might not have been the best player with the best athletic ability, but he got more out of what he could do than probably any player I have ever had. He has gone on to become a great head coach and the fact he got started with us was something special.”

Aside from an occasional vacation, Brashier and his wife, Ann, remained in Iowa City after his coaching career. Every Saturday he watches football on television, especially the Iowa Hawkeyes.

“Kirk Ferentz and I are good friends because Hayden gave him his first job,” Brashier said. “Kirk is a very, very solid good coach with a great staff. It is a pleasure for Iowa to have that kind of person and those kinds of coaches.”

It is Brashier who is credited with convincing Fry to accept the Iowa head coaching offer in 1979 over deals from Oklahoma State and Ole Miss.

“Hayden asked our opinion, but he probably already had his mind made up,” Brashier said. “I said `I don’t think you can go to a better place than the University of Iowa. If you win there, you know what happens.'”

It was a magic era for Hawkeye football. An era that was made possible because of Brashier and the defenses he trained.