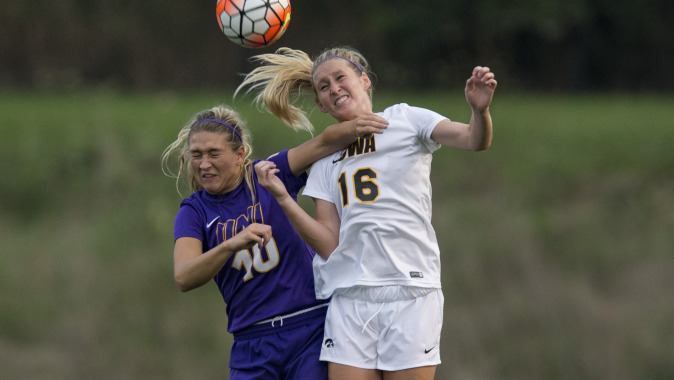 Armand began her collegiate soccer career at the University of Louisville following a standout prep career at Waubonsie Valley (Illinois) High School. She got caught up in the facilities and the glamor of playing in the Atlantic Coast Conference.

After an injury-plagued two seasons, where she played in 13 games, Armand wanted to explore other options. That opened the door for UI head coach Dave DiIanni.

“Iowa was a school I was interested in back in high school,” said Armand. “Dave also recruited me when he was at Grand Valley State. My club coach was good friends with him, so I asked him to get my name out there.”

Armand did her homework, not just about the soccer program, but the university.

“Looking back, I chose Louisville because of the facilities and soccer,” said Armand. “Transferring to Iowa, it was the whole package — academics, team, and soccer. When I came here, I fell in love with the campus, and I knew it was the right fit.”

It didn’t hurt that Iowa’s program felt comfortable to Armand. Two freshmen — Emma Rigby and Morgan Kemerling — were high school teammates, and she knew Jenna Kentgen, Corey Burns, and Amanda Lulek from her prep playing days. She was also a teammate of Burns last summer for the Chicago Red Star Reserves.

“It helped knowing so many girls,” said Armand. “It helped in making my decision, and it made it easy to transition to a new team and school.”

After losing two four-year starters (Caitlin Brown and Melanie Pickert) from the defender position, Armand has stepped in to provide stability to Iowa’s back line. She has started all five games as a central defender, logging a team-high 451 minutes. The Hawkeyes have surrendered three goals, and are 4-1-0 this season.

“She has been great for us on the field; she has a high soccer IQ,” said DiIanni. “She is completely different than Melanie or Caitlin, but is a little bit of both. She’s hard-nosed and physical like Cailtin, and cerebral and technical like Melanie.

“She’s the total package. We’re happy transferring has worked out for her because it has been a success for the team.”

After missing a majority of her first two seasons because of injury, Armand is motivated to prove she can compete at a high level.

“After two ACL surgeries, I want to show everyone that I am still the player I was in high school and even better,” said Armand. “I want to prove that I can play at this level and having the two ACL surgeries doesn’t prevent that.”

DiIanni is a believer.

“She has been a calming influence for a young program and an inexperienced group of players,” he said. “She was recruited to an ACC school and rightfully so… every day she shows us why that was the case.”

Armand is thankful for her second chance.

“Transferring to Iowa has been a great experience and I am happy with my decision,” she said. “We’re a young team, but we have potential. I am excited to see the success we can have this season.”

The Hawkeyes return to the pitch Friday, hosting Iowa State in the first Iowa Corn Cy-Hawk Series matchup of the season. Game time is 6:30 p.m. (CT) from the Iowa Soccer Complex.