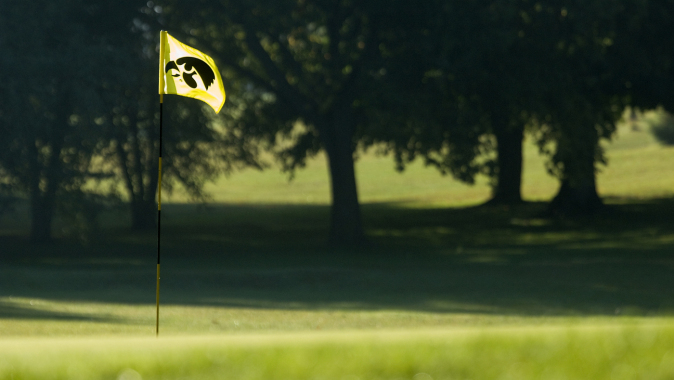 THIS WEEK
The University of Iowa men’s golf team travels to Minneapolis this weekend to compete in the 11th annual Gopher Invite held at Windsong Farm Golf Club. The two-day tournament, hosted by the University of Minnesota, begins on Sunday, Sept. 13 at 7:30 a.m. (CT) with a round of 36 holes. The final round consists of 18 holes and will begin at 7:30 a.m. (CT) on Monday. Live stats will be available via Golfstat.com.

THE COURSE
Windsong Farm Golf Club in Independence, Minnesota, is the site of this weekend’s two-day event. The 7,152 yard, par 71, offers a classically designed, superbly maintained golf course in an informal atmosphere for those who love the game of golf.

THE LINEUP
Senior Nate Yankovich, juniors Raymond Knoll and Carson Schaake, sophomore Sam Meuret, and freshman Matthew Walker are set to compete for the Hawkeyes at the Gopher Invite. Walker will be making his collegiate debut this weekend.

HAWKEYES IN THE RANKINGS
The University of Iowa men’s golf team is ranked 38th out of 302 teams in the Golfstat Relative Rankings, released on June 8. The Hawkeyes are ranked 43rd in the latest Golfweek rankings that were released on June 10. Iowa is the second-highest ranked Big Ten team behind Illinois, who is ranked first in both rankings.

THE STITH MINNESOTA CONNECTION
Before Tyler Stith was named the UI head coach on Aug. 22, 2014, he served as assistant coach at Minnesota for three years (2011-14). He helped the Gophers to a Big Ten Title in 2014 and an appearance at NCAA Regionals.

A PROGRAM ON THE RISE
Iowa has won eleven tournaments since 2008 and has had 14 individual medalists since 2009, including Carson Schaake, who was crowned individual co-champion at last year’s Big Ten Championships. The Hawkeyes have also had three All-Americans since 2008. Nineteen Iowa players have been named to the all-region team since 2009. Last season, Brian Bullington, Raymond Knoll, and Carson Schaake each earned Division I PING All-Midwest Regional honors.

QUOTING COACH STITH
“We’ve had two really good weeks of practice. The guys are very excited and are extremely motivated and anxious to get the season underway. They all worked really hard this summer; we had a lot of quality results from a number of guys. I feel really confident about the guys who are going to Minneapolis to compete this weekend.”

LOOKING AHEAD
The Hawkeyes return to action in two weeks when they host the annual Golfweek Conference Challenge at Spirit Hollow Golf Course in Burglington, Iowa. The three-day tournament begins on Friday, Sept. 25.