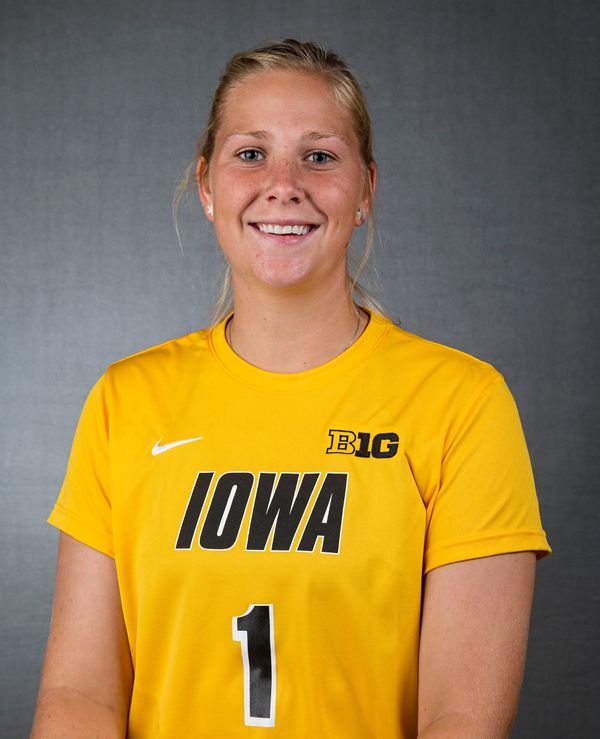 Hawk Item — Finished her career as the school record holder in career wins (36), shutouts (26), victories in a single season (15), and single-season shutouts (10)… also was third all-time with 321 saves.

2014 — Started 17-of-18 games played in, logging 1598:12 minutes… made 76 saves while allowing 14 goals on her way to a 10-5-1 record at goal… ranked third in the Big Ten in save percentage (.844), tied for third in shutouts (9), and ranked fourth in goals against average (0.79)… anchored a Hawkeye defense that set the school record for most shutouts in a season (12) and fewest goals allowed in a regular season (16)… Iowa’s defense ranked second in the Big Ten in shutouts and fourth in goals against average (0.75)… had four consecutive shutouts from Sept. 7-20, where she had seven saves over 379:26 scoreless minutes… surpassed Emily Moran (15) for the most career shutouts in program history in win at Michigan State on October 2… tabbed as the Big Ten Conference Player of the Week by College Sports Madness on Sept. 16 after making a combined seven saves in a pair of shutouts over Illinois and Northwestern… named Big Ten Co-Defensive Player of the Week on Sept. 23 after compiling five saves in Iowa’s 1-0 shutout victory at Minnesota… broke the school record for career shutouts in Iowa’s 1-0 victory at Michigan State on Oct. 2… held Wisconsin’s potent offensive attack scoreless through 93:12 minutes in the Big Ten title game, grabbing six saves before being sidelined for the rest of the game due to injury… named to the Big Ten All-Tournament team after posting two shutouts and making 20 saves in three games to lead Iowa to the championship game for the second-straight season… letterwinner.

2013 — Started all 23 matches… made 85 saves and allowed 25 goals… ranked second in Big Ten in goals against average (1.07) and shutouts (10)… ranked sixth in Big Ten in saves (85)… anchored defense that tied the program record for shutouts in a season (10)… made a career-high nine saves in the first round of the NCAA Tournament at Notre Dame… named to the Big Ten All-Tournament team after posting two shutouts, a 0.33 goals against average and making 14 saves in three games and leading Iowa to the championship game for the first time in school history… posted back-to-back shutouts in victories over No. 7 Michigan and No. 20 Penn State… named Big Ten Defensive Player of the Week on Sept. 3 after leading Iowa to team title at Pacific Soccer Classic… was also named to the all-tournament team…art of team that earned most wins in a season (15) in program history… allowed one goal and posted five shutouts over the first six games of the season… led Iowa to a school-record 15 victories… letterwinner.

2012 —Played all 21 matches, logging over 1,000 minutes in goal… winner of team’s Newcomer Award… made 55 saves and allowed only 11 goals… ranked third in the Big Ten in save percentage (.833) and ninth in total saves (55)… anchored a defense that set the program record for shutouts in a season (10) and tied the record for fewest goals allowed in a regular season (17)… didn’t allow an opponent to score in 13 matches… tallied a season-high seven saves against Michigan and Minnesota… named Big Ten Co-Freshman and Co-Defender of the Week on Oct. 1… named Big Ten Co-Freshman of the Week on Oct. 8… part of team that earned second most wins in a season in program history… letterwinner.

High School — Played two years at Rocky Mountain High School before playing club soccer exclusively… named Rocky Mountain’s Defensive Player of the Year as a freshman and sophomore… played for the Arsenal Football Club from 2004-07, earning a runner-up finish at the 2005 State Cup… played for the Colorado Rush from 2008-12, winning three Colorado State Cups… placed third at the USYSA National Championships and fourth at the ECNL National Championships… played for the Colorado Force of the United Soccer League from 2009-11… tied for 10th in the nation with a 1.333 goals against average and ninth with 49 saves in seven games… named the USL Player of the Week in May, 2011… lettered in basketball as a senior.