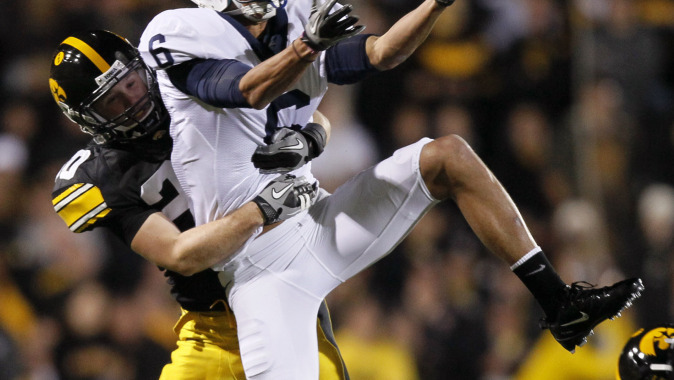 Greenwood earned second team All-Big Ten honors as both a junior and senior. He was named a Permanent Team Captain in 2010 following his senior season, completing his career in Iowa’s 27-24 Insight Bowl win over 12th-ranked Missouri. Greenwood helped Iowa post a 28-11 record in his final three seasons, including wins in the Outback, FedEx Orange and Insight bowl games.

Greenwood, a member of Iowa’s Leadership Group for four years, is a native of Bettendorf, Iowa, and attended Pleasant Valley High School. He is tied for sixth in career interceptions (12) and totaled 229 career tackles.

Greenwood was named to the Freshman All-Big Ten team and was Academic All-Big Ten in 2007. His interception at the goal line saved a 10-6 win over 18th-ranked Illinois and for the season he ranked 10th in the Big Ten in pass break-ups.

Greenwood earned honorable mention All-Big Ten recognition as a sophomore in 2008 as Iowa posted a 9-4 record. He collected 12 tackles in a home win over third-ranked Penn State.

He started 12 games in 2009, missing one contest due to injury, as the Hawkeyes posted an 11-2 record, including the Orange Bowl win over Georgia Tech and an overtime loss at Ohio State in what was, essentially, the Big Ten championship game.

As a senior in 2010 Greenwood led the Big Ten and ranked 22nd in the nation with five interceptions. He started all 13 games in his final season, concluding his career with 11 tackles and an interception in Iowa’s Insight Bowl victory.

Greenwood will accompany the Iowa captains to the center of the field for Saturday’s pregame coin toss. He will also be with the Hawkeyes in the locker room before and after the game.

Tickets are available for Saturday’s contest, online at hawkeyesports.com, in person at the UI Athletics Ticket Office in Carver-Hawkeye Arena, or by calling 1-800-IAHAWKS.