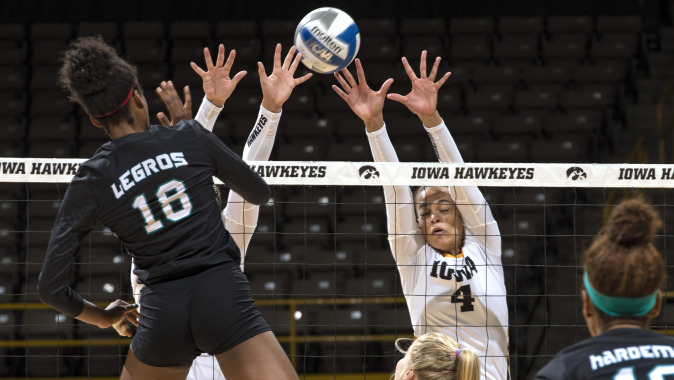 B1G OPENER
The University of Iowa volleyball team begins its Big Ten slate hosting No. 4 Nebraska on Wednesday, Sept. 23 at 7 p.m. (CT). The Hawkeyes enter the match with a 10-3 record, while the Cornhuskers are 9-1 on the season.

WATCH
Wednesday’s match will be streamed live online via BTN Plus. To see if your cable package gives you access to BTN Plus content, sign up for BTN Plus or learn more about it, visit btn2go.com.

8 STRAIGHT
The Hawkeyes are riding an eight match win streak — the longest streak for the program since 2006. Iowa defeated American, 3-1, at the Hawaiian Airlines Wahine Volleyball Classic on Sept. 6. The following weekend (Sept. 11-12), the Hawkeyes went 3-0 in Comfort Suites Challenge action with wins over Milwaukee (3-0), Iowa State (3-1), and No. 25 Texas A&M (3-1). Iowa continued it streak on Sept. 18-19, sweeping the Holiday Inn Hawkeye Challenge tournament field with wins over Gardner-Webb (3-0), Coastal Carolina (3-0, 3-0) and Drake (3-0).

NATIONAL CHATTER
Following an eight game winning streak, the Hawkeyes are gaining national attention. Iowa is receiving 24 votes in the most recent American Volleyball Coaches Association (AVCA) Top 25 Poll, released on Sept. 21. Thirteen of Iowa’s 2015 opponents also appear in the poll. No. 1 Penn State, No. 4 Nebraska, No. 9 Illinois, No. 11 Hawai’i, No. 12 Ohio State, No. 13 UCLA, No. 16 Wisconsin, No. 20 Purdue, No. 21 Minnesota, No. 22 Michigan, No. 23 Pacific are all ranked within the top 25, while Michigan State and Texas A&M are receiving votes. The Hawkeyes are also ranked No. 26 in PrepVolleyball.com’s College Top 50 released on Sept. 22.

IN THE BIG TEN – INDIVIDUAL RANKINGS
?Loxley Keala has the second-best assists per set average in the Big Ten. The junior owns an 11.59 average, just behind Wisconsin’s Lauren Carlini (11.77).
?Junior Lauren Brobst ranks seventh in the conference in kills per set (3.63).
?Sophomore Annika Olsen is averaging 4.74 digs per set, the fourth-best average in the conference.

HOLIDAY INN HAWKEYE CHALLENGE ALL-TOURNAMENT TEAM
Loxley Keala was named tournament MVP following the Holiday Inn Hawkeye Challenge on Sept. 18-19. The junior finished the weekend with 152 assists, averaging 12.67 assists per set. Senior Mikaela Gunderson and freshman Reagan Davey were both named to the all-tournament team. Gunderson hit .408 in four matches with 24 kills, while Davey notched 33 kills on the weekend, including a career-high 14 against Coastal Carolina on Sept. 19.

B1G SETTER OF THE WEEK
University of Iowa junior Loxley Keala was named Big Ten Conference Setter of the Week for her performance in the Comfort Suites Challenge on Sept. 11-12. It is the first conference honor of Keala’s career. The Kaneohe, Hawaii, native is the first Hawkeye to earn a Big Ten weekly award since Bethany Yeager was named defensive player of the week on Sept. 2, 2013. Keala is the first Hawkeye in program history to win a weekly setter award. Keala posted 40-plus assists in all three matches that weekend, including a career-high 57 against No. 25 Texas A&M. She led the offense to back-to-back matches with a .300 or better attack percentage, including a season-high .379 against Iowa State and .303 versus Texas A&M. Keala tallied 154 assists and averaged 14 assists per set on the weekend.

DOWN GOES NO. 25
The Hawkeyes notched their first win over a ranked opponent on Sept. 12. Iowa’s 3-1 victory over No. 25 Texas A&M marked the first ranked win for the Hawkeyes since defeating No. 12 Purdue, 3-1, on Nov. 8, 2014. Junior Loxley Keala led the Hawkeye offense with a career-high 57 assists, while junior Lauren Brobst paced the team in kills (17). Freshman Reagan Davey and senior Mikaela Gunderson each contributed four blocks.

BIG TEN NETWORK COVERAGE
The University of Iowa volleyball team competes live on the Big Ten Network (BTN) or BTN Plus 16 times this season. The Hawkeyes’ match against Wisconsin on Oct. 23 in Iowa City will be televised live on BTN. First serve is set for 7 p.m. (CT). Fifteen Iowa matches will be shown via live stream online through BTN Plus. To see if your cable package gives you access to BTN Plus content, sign up for BTN Plus or learn more about it, visit btn2go.com.

ON THE RADIO
Twelve of Iowa’s 20 Big Ten Conference matches will air live on KXIC Radio this season. The first broadcast of the season is on Sept. 26 beginning at Nebraska at 7 p.m. (CT). Second-year play-by-play announcer Tim Keating will call the action. Audio for all of Iowa’s home and away matches is available online as part of the premium content package on Hawkeye All-Access at hawkeyesports.com.

ON DECK
The Hawkeyes travel to Lincoln, Nebraska, to take on the nationally ranked Huskers on Sept. 26. Iowa continues its Big Ten road trip against Ohio State on Oct. 2 and Penn State on Oct. 3.