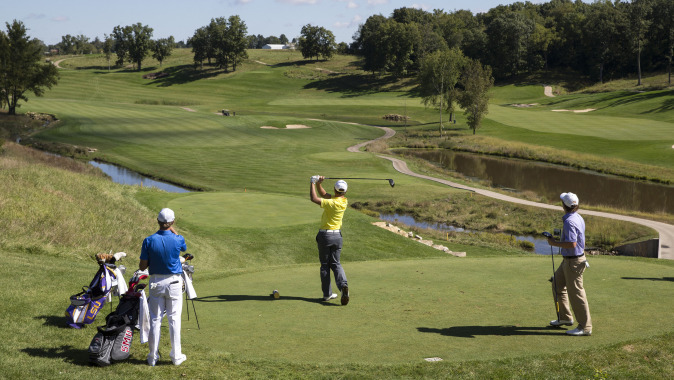 THIS WEEK
The University of Iowa men’s golf team is back in action this weekend, hosting the annual Golfweek Conference Challenge on Sept. 25-27 in Burlington, Iowa. The tournament will be held at Spirit Hollow Golf Course for the sixth consecutive season. The first round will begin on Friday at 9 a.m (CT), with the second round beginning at 9 a.m. on Saturday. Sunday’s final round will begin via a shotgun start at 8:30 a.m., and the Golfweek Awards Ceremony will follow. Teams will play 18 holes each day, and 54 total.

ELITE COMPETITION
Of the 15-team field, none are more notable than LSU. The Tigers won last year’s GolfWeek Conference Challenge before going on to win an NCAA title in the spring. Former LSU Tiger Stewart Jolly won the event in 2013 and 2014.

SMU’s Bryson DeChambeau headlines the long list of individuals competing this weekend. DeChambeau is one of the best at the collegiate level. This past summer he joined Jack Nicklaus (1961), Phil Mickelson (1990), Tiger Woods (1996), and Ryan Moore (2004) as the only golfers to win the NCAA Individual Championship and the U.S. Amateur title in the same year.

A PROGRAM ON THE RISE
Iowa has won eleven tournaments since 2008 and has had 14 individual medalists since 2009, including Carson Schaake, who was crowned individual co-champion at last year’s Big Ten Championships. The Hawkeyes have also had three All-Americans since 2008. Nineteen Iowa players have been named to the all-region team since 2009. Last season, Brian Bullington, Raymond Knoll, and Carson Schaake each earned Division I PING All-Midwest Regional honors.

QUOTING COACH STITH
“There is a wide spectrum of teams represented from a lot of different conferences across the country. In a way, it almost feels like a regional. A lot of teams that play in the GolfWeek Conference Challenge are NCAA Tournament caliber teams. We expect there to be a lot of good teams again this year and we’re looking forward to the competition.”

LOOKING AHEAD
Following the GolfWeek Conference Challenge, the Hawkeyes have a week off before heading to Louisiana for the David Toms Intercollegiate. The two-day tournament is hosted by LSU and begins on Oct. 10.