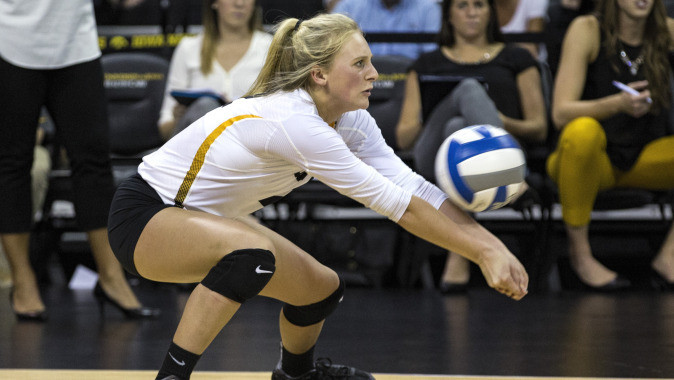 THIS WEEK
The University of Iowa volleyball team travels to Lincoln, Nebraska, to take on the Huskers on Saturday, Sept. 26. The Hawkeyes enter the match with a 10-4 record, while the nationally ranked Huskers are 10-1.

NATIONAL CHATTER
For the second straight week, Iowa is receiving 24 votes in the most recent American Volleyball Coaches Association (AVCA) Top 25 Poll, released on Sept. 21. Thirteen of Iowa’s 2015 opponents also appear in the poll. No. 1 Penn State, No. 4 Nebraska, No. 9 Illinois, No. 11 Hawaii, No. 12 Ohio State, No. 13 UCLA, No. 16 Wisconsin, No. 20 Purdue, No. 21 Minnesota, No. 22 Michigan, and No. 23 Pacific are ranked within the top 25, while Michigan State and Texas A&M are receiving votes. The Hawkeyes are also ranked No. 26 by PrepVolleyball.com.

HOLIDAY INN HAWKEYE CHALLENGE ALL-TOURNAMENT TEAM
Loxley Keala was named tournament MVP following the Holiday Inn Hawkeye Challenge on Sept. 18-19. The junior finished the weekend with 152 assists, averaging 12.67 assists per set. Senior Mikaela Gunderson and freshman Reagan Davey were both named to the all-tournament team. Gunderson hit .408 in four matches with 24 kills, while Davey notched 33 kills on the weekend, including a career-high 14 against Coastal Carolina on Sept. 19.