Hawkeyes in 3rd After Day 1 of GolfWeek Challenge 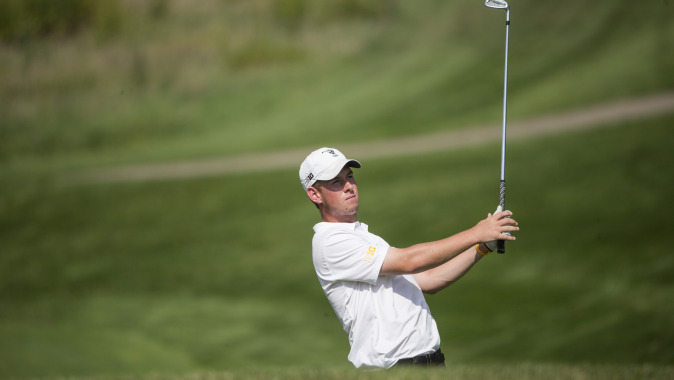 BURLINGTON, Iowa — Through one round at the seventh annual GolfWeek Conference Challenge, the University of Iowa men’s golf team sits in third place at four-under-par (284). The three-day event is being held at Spirit Hollow Golf Course. North Carolina State leads the team race (-19), while Charleston Southern sits in second (-7).

“Overall, I am very pleased with the day and the position we are in,” said UI head coach Tyler Stith.

Four Hawkeyes are in the top-24 of the 75-player field. Junior Raymond Knoll paced the Hawkeyes, firing a six-under-par 66, which ties his career best 18-hole score (2014 Boilermaker Invite) and puts him in a tie for first place heading into Saturday’s second round. The Naperville, Illinois, native notched six birdies in Friday’s opening round, including four on the front nine.

“Raymond’s performance today was outstanding,” said Stith. “He’s not afraid to shoot a low number and he proved that today.”

Making his season debut, senior Voromate Aussarassakorn sat one-over-par through nine. He went on to shoot one-under-par on the back, collecting four birdies in the process. Aussarassakorn ended the first round with an even-par 72, tying him for 15th place.

Senior Nate Yankovich and sophomore Carson Schaake are both tied for 24th after each carded a one-over-par 73.

Freshman Matthew Walker rounded out Iowa’s first round performance with a three-over-par 75. He heads into Saturday’s second round tied for 38th place on the individual leaderboard.

“We are here to compete and we are looking forward to tomorrow’s second round,” said Stith.

The second round of action at the GolfWeek Conference Challenge resumes Saturday with a 9 a.m. (CT) tee time off of holes No. 1 and No. 10. Play concludes Sunday with a shotgun start at 8:30 a.m. Live stats are available at golfstat.com.