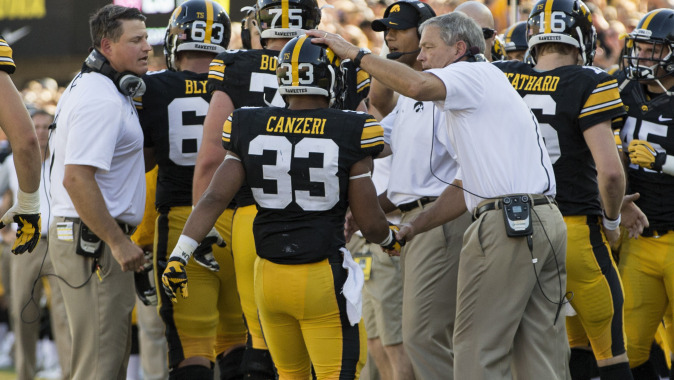 Anyone who knows the senior University of Iowa running back understood the gesture. A consummate team guy, the four fingers symbolized four nonconference wins. It is only coincidence that Canzeri matched a UI school record by scoring four rushing touchdowns during a 62-16 rout of North Texas.

“I thought about that when I was going up the tunnel. It was for the 4-0,” Canzeri said of his postgame signal. “Then I thought, ‘Ooh, that probably seemed a little cocky.'”

When it comes to Canzeri, here’s another “4.” He carried the ball 22 times against North Texas and gained 115 yards — the fourth 100-yard rushing performance of his career. It is the second time he has eclipsed 100 yards this season after picking up 124 yards on 24 carries at Iowa State on Sept. 12.

“He is a team player,” said UI quarterback C.J. Beathard. “Whether he gets five carries a game or 20, he will take the load and do whatever it is for us to win.”

The Hawkeyes are undefeated after four games in 2015 and their leading rusher is Canzeri, a 5-foot-9, 192-pounder from Troy, New York. He has 63 attempts, 316 yards, eight touchdowns and a long of 29 yards. He is also the second-leading receiver with 13 catches and 145 yards.

The four rushing touchdowns he scored against the Mean Green matches an Iowa record last accomplished by Doak Walker winner Shonn Greene during a 38-16 win against Wisconsin in 2008. You need to flip a few more pages in the Hawkeye record book to find the last UI running back with eight touchdowns after four games. It was Tavian Banks with 12 in 1997 when his first four opponents were Northern Iowa (66-0 victory by Iowa), Tulsa (54-16), Iowa State (63-20), and Illinois (38-10).

Canzeri continues to blossom after being thrust into a starting role in the 2011 Insight Bowl with just nine carries and six college games under his belt. He missed the two games prior to that postseason start because of injury, then carried the ball 22 times for 58 yards and caught six passes for 28 yards and a touchdown.

“In that game he proved his toughness,” UI head coach Kirk Ferentz said. “Oklahoma was mad, they were playing good defense, and they were hitting with good intensity. Jordan wasn’t the biggest guy in the world back then. He has grown and developed.”

A knee injury cost Canzeri the 2012 season. As a sophomore in 2013 he notched the first 100-yard game of his career when he picked up 165 yards on 20 carries at Purdue. His only other 100-yard game prior to this season was in the 2014 TaxSlayer Bowl when he ran for 120 yards on 12 carries against Tennessee.

“It is awesome when we have all 11 guys working the way we are,” Canzeri said. “We have so many weapons and that’s something we’re happy with. We’re glad for the success that we’re having now, but we can’t become complacent and have to keep working hard so we get better.”

Iowa’s offense averages 439.2 yards and 37.8 points a game. Twelve of the Hawkeyes’ 20 touchdowns have come on the ground. When it comes to points, Saturday’s scoring explosion is the most for Iowa in 159 games, dating to a 62-10 win against Northwestern in 2002.

“We knew we wanted to run the ball and have success with it and that’s what we did,” Canzeri said. “The line made the holes out there. It is so awesome to be part of the offense we have. We’re all working hard and we’re all one solid unit.”

Perhaps the most encouraging part of the 62-point, 488-yard game on Saturday? There is still room to grow and Canzeri knows it. While fans will focus on 115 rushing yards and four touchdowns, Canzeri remembers his first quarter fumble in Iowa territory.

“I still didn’t have the game I wanted to, I let a ball go,” Canzeri said. “This is the mentality we have as an offense: We’re happy with the success we had, but we know there is a lot of room we can get better and that’s a good thing.”

The next test for the undefeated Hawkeyes is the Big Ten Conference opener Oct. 3 on the road at No. 19 Wisconsin. The Badgers allow just 82.8 rushing yards a game and only Alabama’s Derrick Henry has surpassed 100 yards in a game against them.

“I don’t care about getting a certain amount of yards or carries,” Canzeri said. “All that matters is team success and getting the W.”