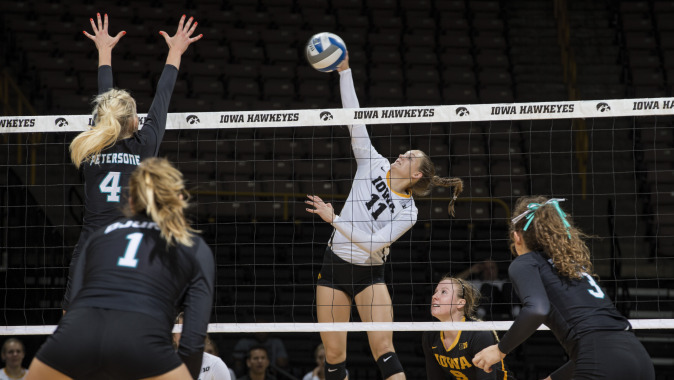 WATCH
Both matches will be streamed live online via BTN Plus. To see if your cable package gives you access to BTN Plus content, sign up for BTN Plus or learn more about it, visit btn2go.com.

NATIONAL CHATTER
For the third straight week, Iowa is receiving votes (7) in the American Volleyball Coaches Association (AVCA) Top 25 Poll, released on Sept. 28. Thirteen of Iowa’s 2015 opponents also appear in the poll. No. 1 Penn State, No. 4 Nebraska, No. 7 Illinois, No. 10 Hawaii, No. 11 UCLA, No. 13 Ohio State, No. 16 Minnesota, No. 18 Purdue, No. 19 Wisconsin, No. 23 Michigan are ranked within the top 25, while Pacific, Michigan State and Iowa State are receiving votes.

CLOSE TO HOME
Jess Janota is an Ohio native. Her hometown of Concord, Ohio, is about two and a half hours away from Columbus, Ohio. The sophomore is averaging 3.02 kills per set in 15 matches this season. She also owns a .313 hitting percentage.

ON DECK
The Hawkeyes return to Carver-Hawkeye Arena for a pair of Big Ten matches next week. The Hawkeyes host No. 23 Michigan on Wednesday, Oct. 7, before hosting Michigan State on Oct. 10.