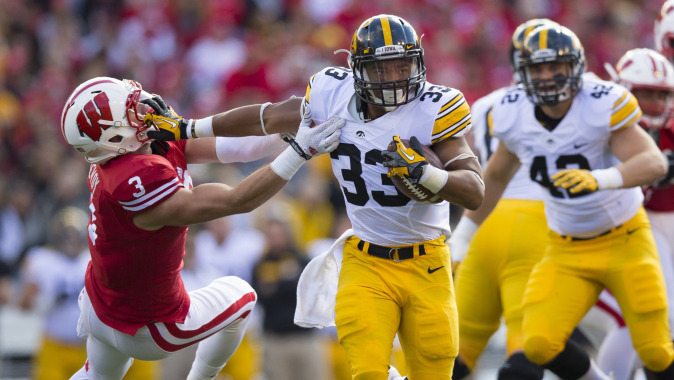 MADISON, Wis. — In the not-so-distant past, a 265-pound power back named Ron Dayne rolled over the field in Wisconsin’s Camp Randall Stadium. On Saturday, a University of Iowa senior — at least an inch shorter and 70 pounds lighter than Dayne — carried a heavy, yet productive, load for the Hawkeyes.

Dayne rushed for more than 7,000 yards, scored 71 touchdowns and won the 1999 Heisman Trophy. Even he had to be impressed with Canzeri. UI head coach Kirk Ferentz sure was.

“I can’t say enough, Jordan is playing well every week,” Ferentz said. “Jordan is a team guy who works extremely hard and is clearly playing his best football. What a great time for that.”

On Iowa’s first offensive play, Canzeri was drilled for a two-yard loss. On the second series he carried four times for 17 yards, offering a preview of what was to come.

In his trademark “team first” way, Canzeri spent much of his postgame interview complimenting the coaching staff and offensive line.

Coaches, he said, told him that Wisconsin would load the box with heavy pursuit, making certain cuts available for sizeable gains.

Soon Canzeri was plowing for seven yards, 15 yards, 19 yards… he hauled the ball 15 times in the first half for 79 yards. In the second half he carried 11 times for 50 yards.

“Our line does an awesome job, so running behind them makes it easier,” Canzeri said. “I’m willing to do whatever I can to help my team win.”

Included in the “whatever it takes for the Hawkeyes to win” category is pass catching. He had one reception for 14 yards against the Badgers. In five games this season, Canzeri is second among Hawkeyes with 14 receptions.

Coaches and players within the UI program aren’t fixated as much on total yards as they are on victories. After Saturday’s `W’ over Badgers, Iowa sits at 5-0 overall, with two road (and trophy) victories to its credit. Wisconsin has played in three of the four Big Ten Conference championship games, winning two of them.

“We have that focus and mentality that we aren’t done,” Canzeri said. “We’re hungry and we want more and more. We have to continue to go over the bar of the standards we have set for ourselves.”

Canzeri now has 441 rushing yards on 89 attempts with eight touchdowns. He has never topped 500 yards in a season; reaching that milestone in 2015 appears a snap. Kind of like snapping a three-game skid in the battle for the Heartland Trophy.

Even after a fast and undefeated start, Canzeri the perfectionist finds frustration. On this day it was because of a fumble that teammate Cole Croston pounced on at the Hawkeye 19-yard line with 3:03 remaining.

“I continually tell myself I didn’t do enough and I need to work harder and focus more on the little things to do a better job so the next game I can help our team more,” Canzeri said.

It isn’t known what Canzeri will be asked to do against the Illini. Will it be 10 carries or 20? Will it be one catch or five? Regardless, he has shown he will be up for the challenge.

“I’m willing to do whatever I can to help my team win,” Canzeri said.