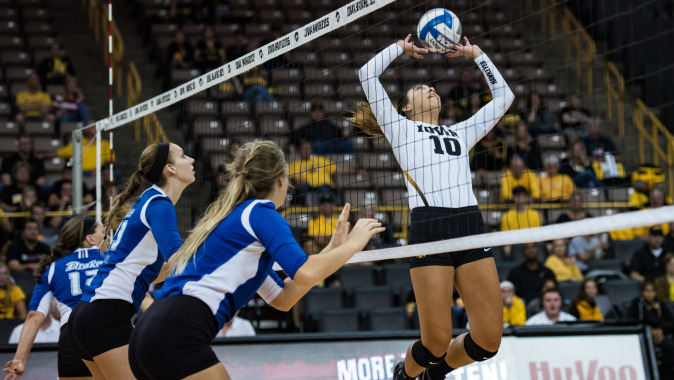 THIS WEEK
The University of Iowa volleyball team returns to Carver-Hawkeye Arena for a midweek matchup against No. 24 Michigan on Wednesday, Oct. 7. First serve is set for 7 p.m. (CT).

LISTEN/FOLLOW ALONG
Live audio is available on Hawkeye All-Access at hawkeyesports.com. Second-year play-by-play announcer Tim Keating will call the action. Live stats are also available for each contest. Links can be found on the volleyball schedule page at hawkeyesports.com. WATCH
Wednesday’s contest will be streamed live online via BTN Plus. To see if your cable package gives you access to BTN Plus content, sign up for BTN Plus or learn more about it, visit btn2go.com.

WHITE OUT
Fans are encouraged to wear white to Wednesday’s match against Michigan. The first 1,000 fans in attendance will receive free white Iowa volleyball t-shirts.

STRENGTH OF SCHEDULE
According to the NCAA, the Hawkeyes have the seventh-strongest strength of schedule in Division I Volleyball, which is the highest ranking among Big Ten opponents. Wisconsin (8th) and Northwestern (9) also made the top 10. Iowa currently owns a team RPI of 33.

ON DECK
The Hawkeyes return to Carver-Hawkeye Arena on Saturday, Oct. 10, when they host Michigan State at 7 p.m. (CT). Fans that present a ticket from the Iowa football game against Illinois will receive free admission.