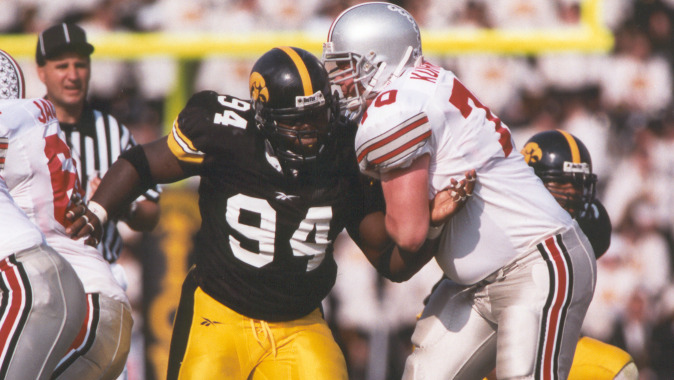 Cole lettered for the Hawkeyes from 1999-2002, helping coach Kirk Ferentz build Iowa’s 2002 Big Ten championship team. He recorded 213 career tackles and as a senior helped the Iowa defense rank fifth in the nation against the rush (81.9).

The native of Fort Lauderdale, Florida (South Plantation HS) earned second team All-America honors as a senior. He was named first team All-Big Ten as a senior after earning honorable mention honors as a junior. Cole was a team captain and Most Valuable Player in his final season and was selected to participate in the Senior Bowl. He started all 13 games as a senior, concluding his Hawkeye career in the 2003 Orange Bowl.

As an undrafted free agent, Cole proved himself in the NFL, where he has enjoyed a long and successful career. Cole played five seasons in Green Bay (2004-08), before also spending time with the Seattle Seahawks (2009-10) and Carolina Panthers (2013-15).

Cole has played in 117 NFL career games, with 57 starts. He has recorded 170 solo tackles, 92 assists, and 5.5 sacks in his professional career.

Cole will accompany the Iowa captains to the center of the field for Saturday’s pregame coin toss. He will also be with the Hawkeyes in the locker room before and after the game.

Tickets are available for Saturday’s contest, and all remaining home games, online at hawkeyesports.com, in person at the UI Athletics Ticket Office in Carver-Hawkeye Arena, or by calling 1-800-IAHAWKS.